What does the GO statement do in SQL Server?

The GO statement from SQL Server caused me great curiosity and I don't really know how to use it properly.

I noticed that queries with or without GO don't return errors and seem to work the same, so what is the purpose of it and why should I use it?

And what is the difference between semicolons ; and GO at the end of a query?

GO is not a part of the TSQL language. It's a batch separator used by SQLCMD and SSMS.

GO is not a Transact-SQL statement; it is a command recognized by the sqlcmd and osql utilities and SQL Server Management Studio Code editor.

A Transact-SQL statement cannot occupy the same line as a GO command. However, the line can contain comments.

You can configure what to use for a batch separator in SSMS. GO is the default, but it can be just about anything else. 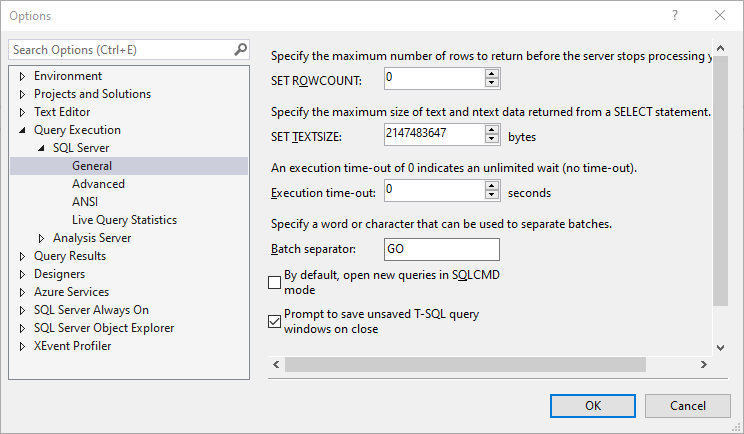 It splits the command into individual batches.

You may think of it as if the whole command got split by GO and each part got executed per se.

But this doesn't work:

These are the explanations:

GO has been well addressed in other answers. Let me add some about semi-colon:

A long long time ago, this wasn't something we used. But the SQL standard (ANSI/ISO SQL) specified that a SQL statement should end with semi-colon. So at a certain version, MS allowed it to comply with ANSI SQL. But it was, and mostly still is, a no-op. I.e., it makes no difference if you have it or not

I wasn't involved when the SQL language was invented (I was a kid), but I can imagine that semi-colon was specified as a statement terminator to simplify parsing of SQL. I.e., when you submit SQL to the db engine, it first has to parse (understand what you said, basically) the statement(s). You can probably imagine that is might be easier for the parsing code in the engine if it could look for some certain character that means "end-of-statement". Hence semi-colon. But as I noted, SQL Server didn't use semi-colon for parsing.

Now, with time, some new language elements that was introduced required that the preceding statement was terminated with semi-colon (WITH as in CTE and THROW being two examples). Without it, SQL Server couldn't parse (understand what you said) and you got a error generated from the parsing phase.

At one time MS said that not ending a statement with semi-colon was deprecated. I.e., they tried to make us believe that at some point in time (some future release), we have to end all our statements with semi-colon. I was probably not the only one who found that a bit amusing - imagine the backwards compatibility aspects! Jumping to present time, if you read the documentation, you find that this is no longer the case (in fact, there are no deprecated featured today - none!).

I would like to add here that, if you add Go statement between different statement, it will continue executing your queries irrespective of any error thrown. If you skip Go statement, then your execution will stop after any error and the next statements won't be executed. The best use case e.g., if you have multiple insert statements, and you want to continue your execution if there any any error in your insert statement(you want only the logs of execution maybe) then please write this batch separator. If you want to stop execution at the statement where there is an error, want to make some changes and then continue execution later on, do not write GO separator.

38
GO After every T-SQL statement

6
What exactly does the last_value() window function do?
1
why doesn't this parameterized sql return anything while the non parameterized one does?
2
Alter table Statement Failed -Msg 207, Level 16, State 1
2
What is the different between resource pools and workload groups in sql server?
2
How to force SQL server to use row locking for specific update/delete statements
2
Is there a performance difference in the 2 temp table initializations?
10
Why does the READPAST hint cause indexed views to be ignored?
2
Port SQL Server data to MySQL without Workbench
1
SQL Server - global temporary table vs normal table
0
What is the history of the SQL Server ANSI (ISO) compatibility settings?