I logged into one of our production databases today and tried listing the databases using \l and got:

Since I am not touching any content, merely metadata on databases, I am not sure where to begin to attack this. Other than the superfluous similar error, I do not see how answers to similar questions are directly of help. If I were to guess, I would think that one of the names of the databases included chars not representable using utf8.

Why (an excursion into raw byte territory)

This took a while to dig into, but I used the tip from the comments section that \l is actually equivalent to a SQL query on the pg_catalog.pg_database. By switching which columns to list I was able to find the column that was proving problematic and by showing it as raw bytes I could pinpoint exactly where: 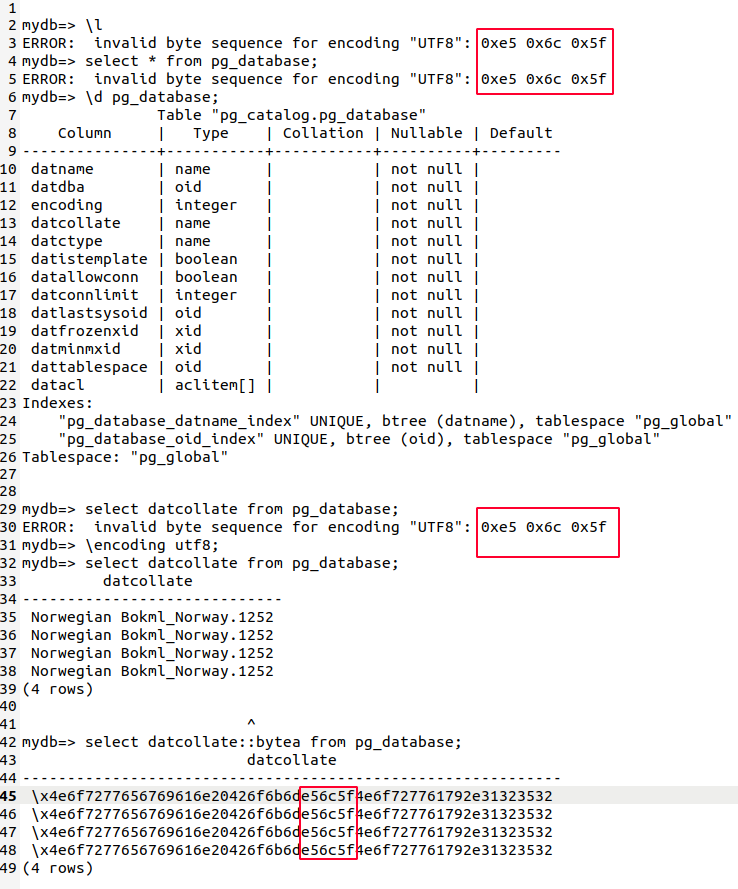 So it was the datcollate column that was proving problematic. According to the docs, this column is of type name and is LC_COLLATE for this database. Obviously there is something that escapes the eye, since there is nothing in the UTF8 encoded output that is "non-ascii", but the output is a bit weird, since the locale name has some chars which seems to have disappeared: the "å" character in "Norwegian Bokml_Norway.1252" is missing (should be "...Bokmål..."). Is it just a coincidence?

Let's compare outputs of standard ascii with the output above:

If you compare this with the raw output above you see that the psql output has an additional byte: e5 between 6d and 6c. This is not showing.

So this is how å is encoded in my UTF8 terminal:

Indeed, it was! So the problem is that the locale name is encoded in the internal postgres database as WIN1252, which seems to not be handled correctly when the server encoding is set to UTF8, as the client seems to assume that the data it receives will be all valid utf8.

Coincidentally, this also fixed another, related issue I was fixing, which happened when trying to list contents from a VIEW that contained UTF8 Norwegian characters:

Your collation Norwegian Bokmål_Norway.1252 comes from the operating system (Windows) and is taken as it is. Now Windows uses the Windows-1252 encoding, where å is code point 226, in hexadecimal E5.

This string is taken into pg_database.datcollate as it is, but PostgreSQL expects the name to be in UTF-8, which causes the error.

PostgreSQL has to sanitize that string , so this is a PostgreSQL bug (though, admittedly, Windows is to blame for changing its locale names from version to version).

This special case was actually fixed in 2019, so if you had used a recent bugfix level of PostgreSQL, you could have avoided the problem.

A patch has been proposed to deal with problems like that on a more general basis, but it never got committed because nobody on Windows tested it. You could push this on the -hackers list, ideally be testing the patch (but that requires building PostgreSQL on Windows, which requires some amount of setup).

Not the answer you're looking for? Browse other questions tagged postgresql psql or ask your own question.