I have a task of making periodical copy of the database, twice a day, and I should not break any backup chain niether accumulate these temporary backups. So I tried to take a copy_only backup with init in order to overwrite the single backup file.

My database in encrypted by using TDE.

My problem is this error below:

Here is the full code I executed:

The first time it executes without errors, the size of full backup is about 35Mb and it restores perfectly.

I tried to execute the same code using another db and another disk to save the backup but the result is always the same: the first time it works, the second time the file is overwritten but has different size that is not just a double size, it's almost 10 times of initial size. restore headeronly never fails and always reports only one file within the backup file but the size is multipticated and restore database fails.

Only when I added format option the size of backup became normal and restore succeeded. 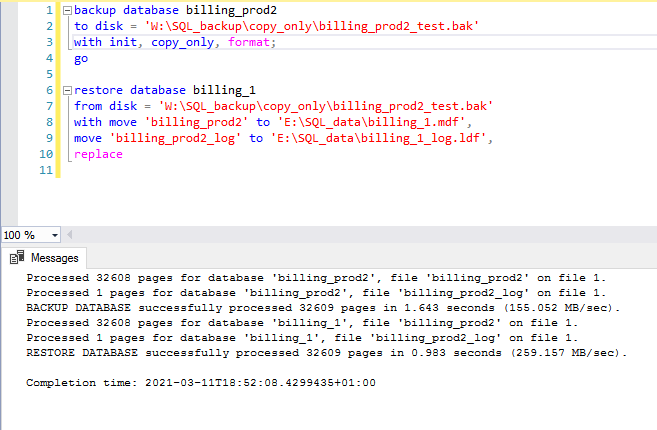 My question is: why should I use format with my backup in this case to be able to restore?

This is indeed a bug in SQL Server. We (@sepupic and I) had some discussions offline and managed to narrow down the circumstances: The error occurs when:

Not the answer you're looking for? Browse other questions tagged sql-server backup restore sql-server-2019 or ask your own question.