We're running sql server on vmware. Our san is pretty new but still I think I/O is pretty crappy even though I'm supposed to be on separate spindels. Server speeds are: 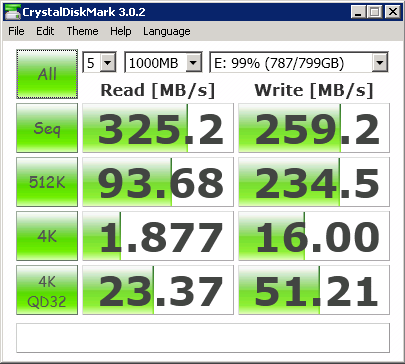 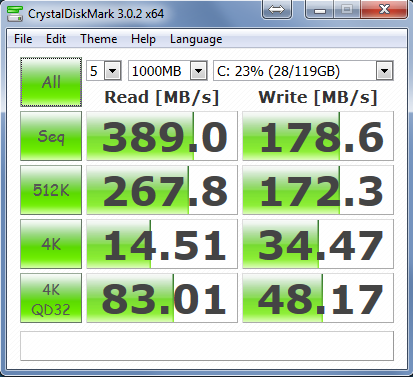 Is our san slow? Can I get some comparative values from other users? If so please let me know if you're on a vm or a physical machine. It looks like it's doing pretty ok writing but reading is really terrible...

Without knowning the exact configuration that your array is configured in the numbers are just numbers.

Another thing to note is that 4k IO are a worthless measure as are 512k IO. SQL Server will be doing almost all of it's IO in 64k IO.

It looks to me like your "true spindle performance" is just under 500 IOPS, although I'm not entirely sure why increasing the queue depth gives you that much higher performance. (Perhaps someone else here is able to comment on the impact of queue depth on random I/O?) Also, the higher write performance is most likely caused by write back cache on the SAN side, and you should expect this number to plummet if that cache ever goes full.

500 IOPS is what I would expect from reading across four 15k spindles, with reasonable (less than 10 ms) response times.

The close to 6.000 IOPS indicated by the QD32 4K reads is something I would associate with reading from cache, across two shelves of 15k spindles (eg. 30 spindles) or a single enterprise class SSD drive (although the Oracle Database Appliance sustains 10.000 IOPS across only twenty 15k drives). Like I wrote above though, I'm not sure how to interpret this number from CrystalDiskMark. I do suspect that we might see high response times under this workload and I assume caching on the SAN side comes into play, but I'm not sure why you don't see a similar effect on single thread read test. HBA and driver configuration posibly.

You don't provide much detail about your SAN, environment or workload, so there is no way for me to determine if the numbers indicated can be considered typical or not. Nor do I think that determination is particularly important.

What I think is important, is whether the indicated performance meets the requirements of your database. In my opinion you should try to figure out what performance you need and then work to ensure those requirements are met.

Can I get some comparative values from other users? If so please let me know if you're on a vm or a physical machine?

Here are some performance benchmarks I did on various disk configs after turning off all caching, and there are no VMs, these are just raw disk metrics. I did not see any combination that resulted in vastly lower reads than writes. As Denny pointed out, you might be caching your writes, which means your results will mostly not be typical in the real world. The very low read performance troubles me but if you don't need more IOPS than that then it doesn't mater. It really seems like you need to figure out how many IOPS you need and demand it from your SAN admin.

Edit: I added all the test patterns using 2 threads on a 8 disk RAID 5 array for you to compare at: https://docs.google.com/spreadsheet/ccc?key=0Avbd5fFdssIhdExlbDVJbzltTTJwcURsaU90OE4tbmc

For the person who asked what the outstanding_ios might have on performance, this is what I saw:

Current results are for Pliant enterprise MLC SSD in RAID 1 (2 disks mirrored together):

Notice how the performance is the same whether I increase the outstandingIOs or the threads, but the more of either or combined you throw at the system, the faster it goes until it hit's a hard limit:

You will continue to get throughput increases but avg. latency will go up until you hit the hard limit of maximum throughput the more you either increase the threads or outstanding IOs, at which point you will only accumulate further latency.

Not the answer you're looking for? Browse other questions tagged sql-server san or ask your own question.