How to model entities in an entity-relationship diagram about a car service scenario?

I'm a beginner Database designer and wondering if anyone can help me understand this. Let's say we want to design a system that has, among other entities, an entity called Vehicle, and another one called Service. A service is a repair/maintenance.

How would you look at the cardinalites of that relation of:

Should the minimum cardinality be 0 or one from the car side?

When you are starting off learning how to model databases, one of the most important rules of thumb is: Every tangible thing that matters to your system is probably an entity type.

This is a really good place to start with any logical database design. If you spend some time up front thinking about what kind of things matter to your system, then you're going to come up with a solid foundation on which to build your system. The things your organization cares about will change much less frequently than the business processes and rules your organization uses to deal with those things. That is why a solid data model is so important.

Another important rule of thumb is: Normalize your data model by default and only denormalize when you have a (really) good reason to. This is especially true for a transactional system. Reporting systems and data warehouses are a different story.

Cardinality: If you think about it, it is easily the case that a car could have never been serviced (by your shop). Therefore a minimum cardinality of zero is very plausible. On the other hand, by the time the vehicle matters to your system it may well be because it has had its first service - so a minimum cardinality of one is also plausible. You need to think about what the business rule is for your organization and model accordingly. I would think, for example, that a car dealership would have lots of cars in its system that haven't been serviced by the dealership yet, whereas a muffler shop wouldn't care about cars it hasn't serviced.

Let's consider an intersection entity between car and service... You could potentially use such an intersection to store details about the service, like how much labour, which parts, and consumables were used.

Consider this model as an alternative:

In this model each service is for one vehicle, but each service can have many instances of labour, parts and consumables. This model follows the first rule of thumb I mentioned and makes an entity type out of each tangible thing the system cares about. This might be a good first stab at a logical model.

One of the issues with the above model is that it doesn't handle one aspect of how your system is likely to want to use the data, at least not very well. One of the most important reasons for tracking all of this data in your system at all is so that you can print off an itemized service invoice. That means that a service line item is itself a thing which is important to your system. If you take that into consideration, you might end up with something more like this: 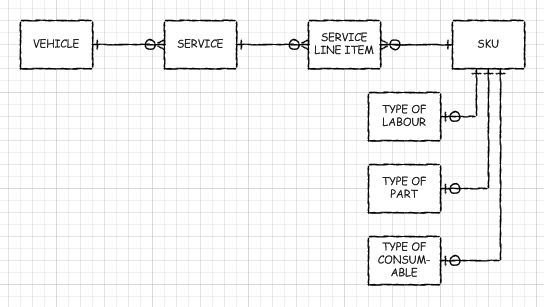 Notice in this second alternative SERVICE_LINE_ITEM is recognized as an entity type. It is an intersection between SERVICE and the generic line item type: SKU. A SKU is a supertype entity that could be a part, a consumable or some kind of labour. You don't need to have a logical supertype for service line item types, but a lot of systems would be modeled this way because it makes the transactional detail much simpler.

This second model introduces abstract entities over and above the concrete entities of the first model. Introduction of abstractions like this is one of the things that tends to happen as you move from an initial logical model, based mostly on tangible things to a physical model.

As you gain experience with data modeling, you'll get good instincts for moving past the conceptual/logical model stage directly to a well structured physical model.

5
ERD for a web development company