I have opened SSMS today, and went to open my database ADMINISTRATOR (in the picture) but this option is unavailable: 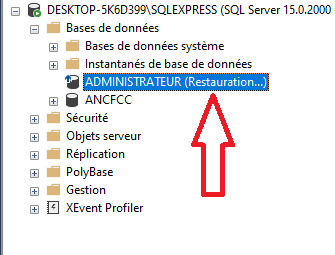 What's this problem, how can I cancel this restore?

I have just added a new database, I didn't perform any restore operation for this database.

When you shutdown/restart your computer/server, the service for the SQL Server Express instance, will be triggered to stop too. While the service is shutting down the SQL Server Database Engine will try to shut down the databases gracefully, in order to ensure they can be restarted in a timely fashion when the system comes back up.

If the system was forced to shutdown/restart before the database was able to be brought to a consistent state, then the recovery will be performed automatically, when the instance is brought back up. The SQL Server Database Engine will find the corespondeing *.mdf and *.ndf file(s) and together with the existing *.ldf file try and bring the database back online.

If for some reason the database was in the middle of (e.g.) a database reindex task or reorganize then there will be a lot of outstanding transactions to either roll-forward (COMMIT) or roll-back (ROLLBACK). Until this procedure has finished, the database will be marked as RECOVERING.

If for some reason the database is unable to brought to a consistent state, then the database will switch to the RECOVERY PENDING... state.

Seeing as your database is neither in the RECOVERING nor in the RECOVERY PEDNING state, then we can conclude that an actual RESTORE DATABASE ... has been triggered, which results in the database displaying the state RESTORING... which should be identical to the French expression RESTAURATION....

You can double-check the state of the database by issuing the command:

Now if for some reason the database does not display the same state in the SELECT statement, then you might just have a simple Refresh issue.

Solution: Right-click the Bases de données in SSMS and click on Refresh

If the database state returned from the query is the same, then have a look at the ERRORLOG file of your SQL Server instance. There should be an entry, when the RESTORE started.

If not have a look at the restore history in the msdb database:

This will show you when the restore started and (if lucky) the user that started the restore.

Solution: End the restore of the database by issuing the command pointed out by Dan Guzman in his comment:

It is not normal for a newly created database to be recovering status. Try executing the command:

...from a query window in the context of the master database.

Not the answer you're looking for? Browse other questions tagged sql-server restore ssms sql-server-2019 or ask your own question.