Can anybody explain the purpose for process_login_finish extended event? I trying to catch some events for XE session with this event, but no one messages arrives to the session.

However event "login" successfully captured. But i dont understand why the "new" events like 'process_login_finish' or 'login_event' does not fire?

While testing on SQL Server 2019, it looks like that process_login_finish event is only fired when a new session is established.

I have a .NET application that I've set Application Name=My Test App in the connection string. It connects to a database (database_id 7 in this case) and runs queries. When I start this app up for the first time, I can check the XE and sys.dm_exec_sessions:

As you can see, the event fired once, and my app has established one session on the server.

The connection pooling feature built into the SqlClient driver means that, if the application isn't under very much load, the same session will continue to be used. Thus I would rarely see this process_login_finish event fire.

If I cause the app to run a bunch more queries, eventually it will create more connections and add them to the pool, and that event will fire each time this occurs: 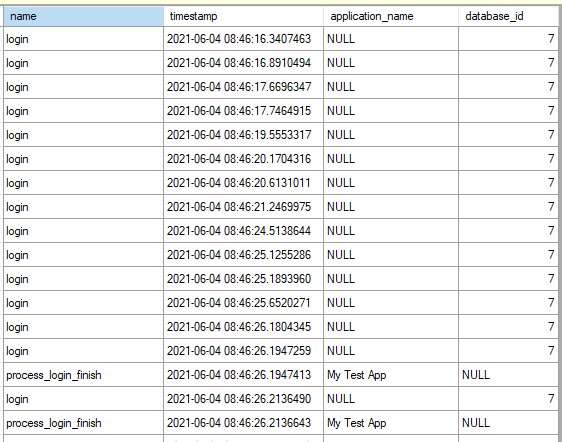 As you can see, eventually process_login_finish fired two more times, and I now have three sessions established from my app.

A certain amount of inactivity can cause the session to go away, in which case the next time the app connects, we'll see process_login_finish fire again.

Note: in my testing above, I never saw the login_event event fire, although it was included in my XE session definition.

Not the answer you're looking for? Browse other questions tagged sql-server-2016 extended-events or ask your own question.

28
Empty blocking process in blocked process report
33
Blue icon with question mark - what does it mean?
0
datetime column returning a zero when queried from a view
6
Rebuilding indexes for a partitioned table having 300 partitions
2
what could be preventing my transaction log autogrowth to be set to UNLIMITED?
1
Entries in suspect_pages but checkdb shows no error
0
How to get the settings associated with a stored procedure in relation to filtered indexes?
13
Unclear update conflict