I try to connect to a remote windows server that has a SQL Instance running using SQL Authentication via my local SSMS and this the error I get:

Cannot connect to 123.123.123.123\WIN-ODF1AGSBGZ
A network-related or instance-specific error occurred while establishing a connection to SQL Server. The server was not found or was not accessible. Verify that the instance name is correct and that SQL Server is configured to allow remote connections. (provider: SQL Network Interfaces, error: 26 - Error Locating Server/Instance Specified) (Microsoft SQL Server, Error: -1)

How I try to connect to the instance: 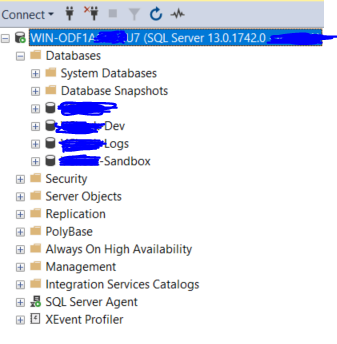 You try to connect to a named instance, meaning that the client tries to use port 1434 UDP to talk to the SQL Server Browser service on that machine in order to determine what post number the instance is listening to and then try to connect using that port.

But then you say that you opened port 1433. 1433 is for a default instance. A named instance uses by default some other port, hence the behavior I mention above.

You first need to determine whether it is a default or a named instance. And in particular what port it is listening it.

You can for instance use SQL Server Configuration Manage to see what port it is listening on.

Not the answer you're looking for? Browse other questions tagged sql-server connectivity or ask your own question.

6
What are valid connection strings for SSMS login box?
3
Unable to connect to remote SQL Server instance after thorough troubleshooting