I've been reading up on this, but the online documentation is a bit difficult to understand and seems awkwardly written. For example the INIT, NOINIT. One says it will try to overwrite everything. The other says it will append regardless.

I want something in-between that. I want expired media sets to no longer be in the file, but for new backup jobs to append to the file along side any sets that have not yet expired.

Will the SQL below perform the desired backup?

If I run the above, and there is a backup set older than 60 days, will it be removed from the file?

In response to RichardTheKiwi's suggestion I have rewritten the code to create a new file each time. I will then write a windows script to delete files older than a certain date

Unfortunately, no, that won't work. It will keep appending but will leave the expired sets in the same archive. This screenshot shows a backup archive using your script, set to RETAINDAYS = 2, run once in November (VM trickery) and again today. 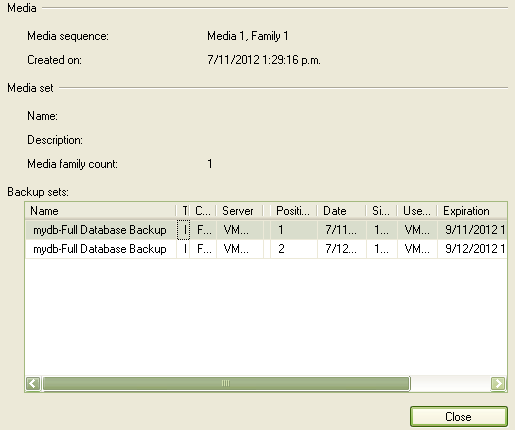 I think what you're after is a rolling backup, so assuming this is weekly, then after a burn in period, it should retain 7 old backup sets, remove one and append a new one.

Personally, I would keep a single backup set per file and use the cleanup feature in the maintenance wizard to remove old files; that or a regular Windows Scheduled Task. There shouldn't be any real need to keep backup sets in a single file.

Not the answer you're looking for? Browse other questions tagged sql-server backup or ask your own question.

3
Filestream database backup error
4
Can I manually reset the “internal status flag for a full database backup”?
9
How can I fix “Cannot perform a differential backup … a current database backup doesn't exist”?
4
How dependent are backups on msdb tables like backupset?
0
Backup Files with Append option growing huge Vs Better Options
2
Handling partial backups from many different databases
7
Is there a limit to how many backups can be appended to a single file?
0
Maximum Error Count Reached
2
How can a database have a logical name that is different than displayed in SSMS?