Why does a Full Backup restore of my database give me the error "RESTORE can only create a database when restoring either a full backup..."?

I've setup a maintenance plan to take a daily Full backup of all databases on my server. I've also setup a second maintenance plan to take Transaction Log backups every 5 minutes. The Transaction Log backups job stops and restarts between 11 PM and 1 AM, to allow server level backups to be taken (at the advisement of the Infrastructure team, perhaps to be revisited). I don't believe this should be an issue though, as I have another server following the same pattern and has no issues with its backups.

I am trying to verify my backups are working properly but any time I try to restore the Full backup with any of the Transaction Log backups that came after it, I immediately get the following error:

If it's of any relevancy, these are the Restore Options I'm using: 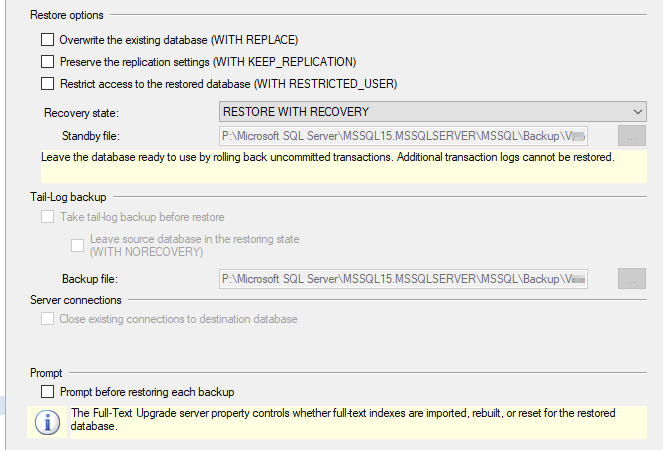 Following this interesting answer by Aaron Bertrand to a similar question, I'm now investigating a few things with the RESTORE HEADERONLY FROM DISK command. Firstly, these are the results for my Full backup file:

Only one database / file stored in that Full backup.

I thought the DatabaseBackupLSN of all of the backups are supposed to match the FirstLSN of the last Full backup prior to those backups. It's odd to me that they all seem to point to an older Full Backup.

When I try to generate the scripts of the restore that SSMS is trying to do, oddly I get the same error as a tooltip, and it won't give me the scripts:

Upon closer inspection, when I select all my backups including the Full, SSMS is automatically removing the Full backup and only loading the Transaction Log backups to restore. I really think there's a broken backup chain of sorts that is confusing SSMS:

Additionally my maintenance plan is not set for "Copy-only backups": 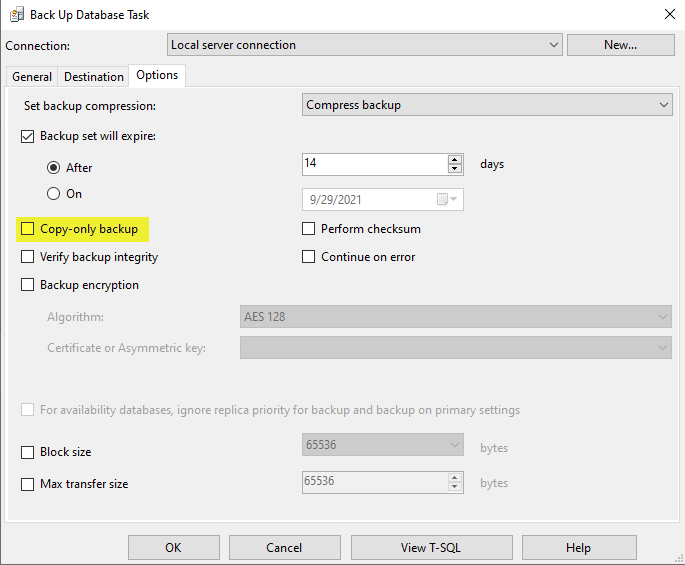 For reference, here is the T-SQL script for one of the databases in the Full backup maintenance plan:

These are the manual scripts I wrote:

The only other relevant information I can think of, is these backup maintenance plans were setup originally on a SQL Server 2016 instance. The server of that instance crashed, and we spun up a brand new server with a SQL Server 2019 instance. I restored all the user and system databases from backups (ironically) to the new SQL Server 2019 instance. (The system databases I had to first restore on a 2016 instance, and do an in-place upgrade before it allowed me to restore them on the new 2019 server.) The only database I couldn't restore to the new server successfully was the master database. Everything else seems to be running fine so far.

The bottom line is that you (unfortunately) can't rely on SSMS to help you with restore. Because it doesn't do it right. I have a case I reported 2014 which IMO is bad where SSMS tries to base a restore sequence on a copy_only backup, and I have reminded MS on this a few times. This has fallen on deaf ears, so that is a pretty clear message to me. See this for a couple of examples: http://sqlblog.karaszi.com/?s=restore.

If you want us to test whether you misunderstand the GUI, give us a repro.

Perhaps a tall order for you but without that we are, as I mentioned, left with "seems to be a bug in SSMS"...

Our server level backup software, Veeam, was apparently configured to truncate the Transaction Log. I had no knowledge that Veeam even could interact at the database level until the wise Tibor Karaszi pointed me in the right direction: 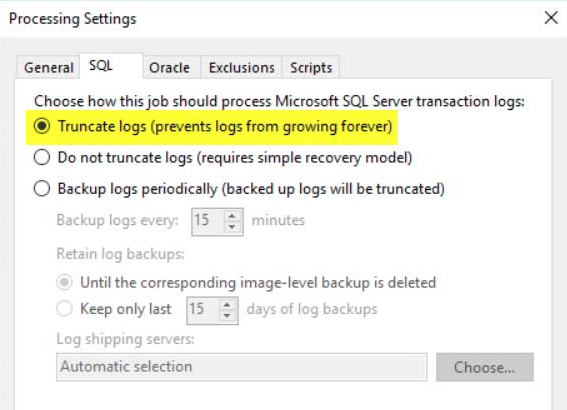 (This was configured long before my existence. Side note, I see absolutely no reason why Veeam would even offer this terrible option.)

Changing this to backup the logs themselves (instead of having a maintenance plan do it) would fix the issue. But I prefer letting SQL Server natively manage the backups, so we just disabled the management of this in the Veeam Backup & Replication software.

In the Veeam Backup & Replication software, under the Edit Backup Job window, in the Guest Processing screen, we unchecked "Enable application-aware processing" to disable it.

For reference, this is Veeam's documentation on configuring it to manage the Transaction Log.

Not the answer you're looking for? Browse other questions tagged sql-server backup restore transaction-log sql-server-2019 or ask your own question.

4
Can I manually reset the "internal status flag for a full database backup"?
2
Log Sequence Numbers in Full BackUp and Log Backup
2
Restoring Database, creating new copy and use existing transaction logs for the original backup database to restore the NEW database to be current?
1
After a full backup, how does system know which transactions to restore from the transaction log backup?
0
Restoring a Database Using Full Backup and Transaction Logs in SSMS
1
Can I restore my SQL Server database to a point before the last full backup with my current backup strategy?
3
Manual log backup makes restore strategy useless upto next full backup only?
0
Does only a full backup (and no tlog backup) of a db in full recovery model allow for point in time recovery?