I'm trying to create a very basic package that copies data from my SQL server into an Excel file.

I've tried every form of data conversion, doesn't matter if it's DT_NUMERIC, DT_DECIMAL, DT_CY, it's always giving me a decimal dot - even when going the Derived Column route, specifically turning the values into DT_WSTR, then replacing every "." with a "," and then converting to any numerical format still gives me a result with decimal points.

The problem is that Visual studio is previewing the SQL input in the correct formats, the numbers do have a decimal comma, the input is 100% correct - but at some point the comma is being transformed into a period without my doing. 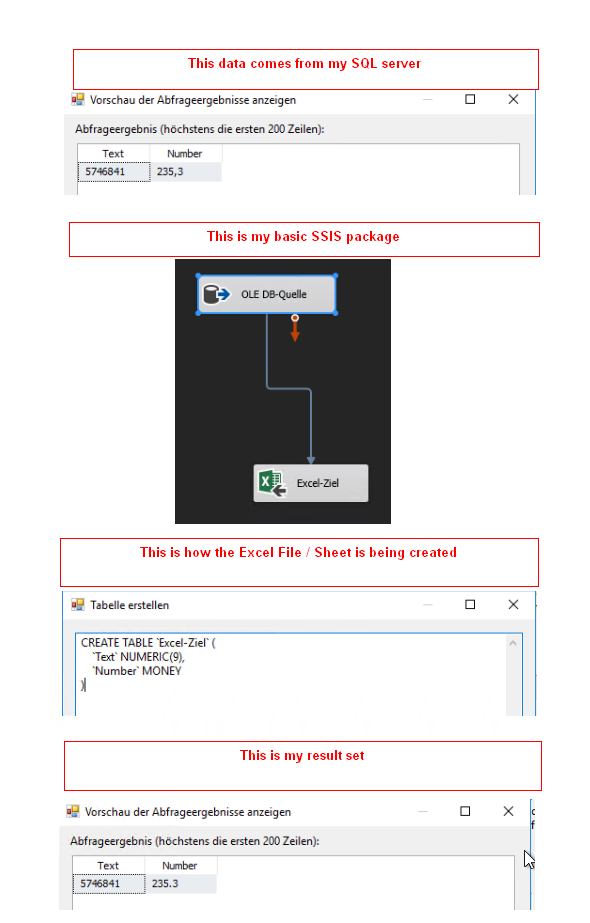 Kinda losing my mind here, anyone got any clue on what's causing this behavior?

As I mentioned in my comment, always worth checking the consumer for rendering issues. In this case, when Excel's involved and it's a formatting issue, you can never be too careful to verify that Excel isn't the source of the problem.

Sometimes changing the Format option for that column in Excel to "Default" or "Text" reveals the original formatting. Though I've had my fair share of issues with Excel still being wonky with how it was formatting my data even then.

Best way to check, when it's a CSV, is to just open the file in a plain text editor and verify the raw data is formatted as expected. Excel seemed to be the issue in your case.