MERGE into a view with INSTEAD OF triggers

I have a view with instead of triggers and I'm trying to use it with EF Core, which tries to batch inserts together in a form of merge statement. Here's my table and view:

Here's the error I'm getting:

The column reference "inserted.id" is not allowed because it refers to a base table that is not being modified in this statement.

The help page for the merge statement says:

I believe I fulfil this condition and I can't see any other relevant limitations. Why doesn't it work?

It's EF who generates the query, not me. I have no control over it. I just want to understand why it doesn't work and if I can fix my trigger somehow to make it work.

It is possible that the inserted reference is not allowed here because SQL Server does not have access to the value actually inserted by the instead of trigger on the view.

SQL Server instead-of triggers are implemented by writing information about the changes that would occur as a result of the triggering statement to worktables (one for inserts, one for deletes).

Instead-of triggers do not use row versioning, like after triggers do. These worktables are fully populated by the triggering statement before the trigger fires.

The OUTPUT clause is part of the triggering statement. The query plan for that statement only has access to values that exist at that time. The instead-of trigger fires afterward. Logically, the output clause cannot return values that have not been computed yet. You can see all this in the execution plans for your example: 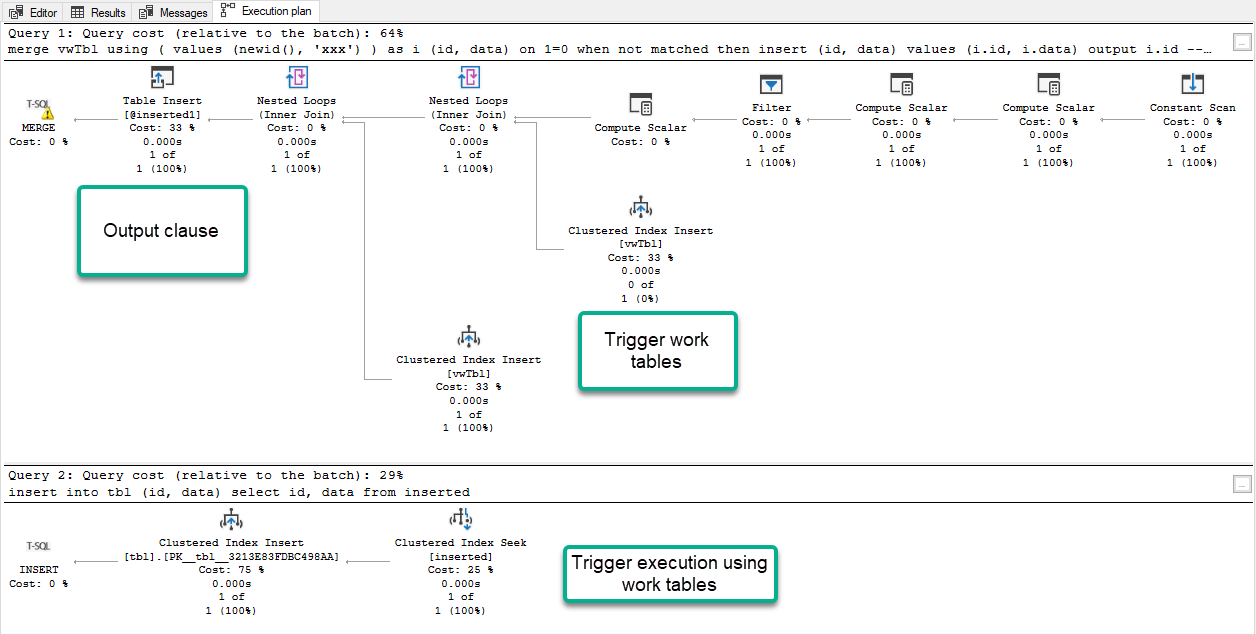 In your implementation, the instead-of trigger essentially does nothing other than a regular insert would do, but that isn't guaranteed to be the case. An instead-of trigger can do anything it likes instead of the triggering action, including doing nothing.

You can get the statement to 'work' by referencing the source column value, but again this will only represent the actually inserted value if the instead-of trigger happens to do the same thing:

There is nothing you can do to change your view's instead of trigger so this pattern will work right now.

On the other hand, it is also completely conceivable this is unintended behaviour. There have been many such cases with MERGE.

The equivalent statement written as an INSERT does work:

This follows the documented OUTPUT semantic for the inserted pseudo-table in this case (emphasis added):

INSERTED
Is a column prefix that specifies the value added by the insert or update operation. Columns prefixed with INSERTED reflect the value after the UPDATE, INSERT, or MERGE statement is completed but before triggers are executed.

If MERGE worked the same way as INSERT here, your statement would work as expected and the OUTPUT clause would return the pre-trigger value. It is possible this is a deliberate design change. There was more than one of those made when MERGE was introduced.

On the other hand, the MERGE statement works as desired if the instead-of trigger is on the base table rather than a view (demo), so the current behaviour is inconsistent if nothing else.

The chance that this is a bug is increased by noting that it is possible to reference the deleted pseudo-table in your example, though it returns a null result, naturally. See this demo. The inference here is that the parser is getting confused about the resulting action (an insert, not a delete).

If you require a definitive answer, your best bet might be to open a support case with Microsoft.

This isn't an answer to the question as asked, but it might help you work around the problem if you can't overcome the issue with the trigger.

As you mentioned, EF Core does this MERGE technique to batch changes and avoid multiple round trips to the database. You can avoid that behavior, if you're willing to accept the overhead of multiple round trips, by calling SaveChanges() / SaveChangesAsync() after each new "row" is added to the DbContext. Doing this will cause EF to flush that single row to the database as an INSERT statement.

As an example, this is the kind of thing that results in a MERGE (add a bunch of things to the DbContext, than call SaveChanges):

This is how you would "force" it to be INSERT statements instead (SaveChanges after each add):

I know I'm late to the party but Josh Darnell actually sparked my memory with his good idea, as I encountered the same exact issue you're experiencing, but couldn't remember how I solved it until now.

Perhaps an even simpler way to disable batching in EF Core is by setting the MaxBatchSize option to 1 when configuring your database connection, as discussed here. Reference code:

By setting the MaxBatchSize to 1, you won't have to call db.SaveChanges() after every change in your application, rather EF Core will generate the appropriate SQL to do an individual INSERT for every change that needs to be committed, even when you have multiple uncommitted changes. Also documented here.

Not the answer you're looking for? Browse other questions tagged sql-server trigger sql-server-2019 merge entity-framework or ask your own question.

5
Why does UPDATE FROM fail and MERGE works on a View with an INSTEAD OF Trigger?

5
Triggers and the Transaction
5
I have an INSTEAD OF trigger, but PostgreSQL still complains while I insert into view
2
SQL Server 2008 Triggers and Merge Replication
2
MySQL BEFORE INSERT trigger with IF conditions
3
Instead of insert trigger VS For insert Triggers in SQL server
1
Triggers corrupt merge replication
1
Trigger on indexed view
5
Why does UPDATE FROM fail and MERGE works on a View with an INSTEAD OF Trigger?