Copy many large tables to another database

What I have to do

A lot of those tables are quite small, but some of them are very large, the largest has currenly around 55 million rows, but grows somewhat fast.

What a coworker suggested

A coworker was doing something similar in a test environment, and developed a script to do this, which basically did:

And did this for around 30 tables he was running tests on. I tried to start with this approach, but when I tested with the first table (the 55 million rows one), it's just taking too long.

What is different between my coworkers' case and mine

I see 2 differences between what my coworker did and what I have to do:

I first tried using Linked servers, and it seems to work since I see no error, but it's taking forever, and my boss wants this task to be performed every two weeks at night, so it's unfeasible for it to take so long.

Which would be the most efficient way to copy over 500 large tables to another database, hopefully in less than two hours?

Database backup and restoration is safest method to achieve what you are looking for.

You may use compression method and stripe(multiple files) to make size of your backup smaller and then copy the backup file to your second server and restore it.

You may also use bulk copy(BCP) for copying however that will again be at table level and not at database level.

Please also make a note of one important point - In case, you have any foreign key constraints on these tables, you need to copy them in the right sequence otherwise it would fail.

To avoid all these issues, backup and restoration is the most reliable, safest and fastest method.

Database backup contains all indexes, constraints and every objects inside database, it will be part of one bundle called database backup and you can restore it on second server.

An option could be the SQL Server Import and Export Wizard. 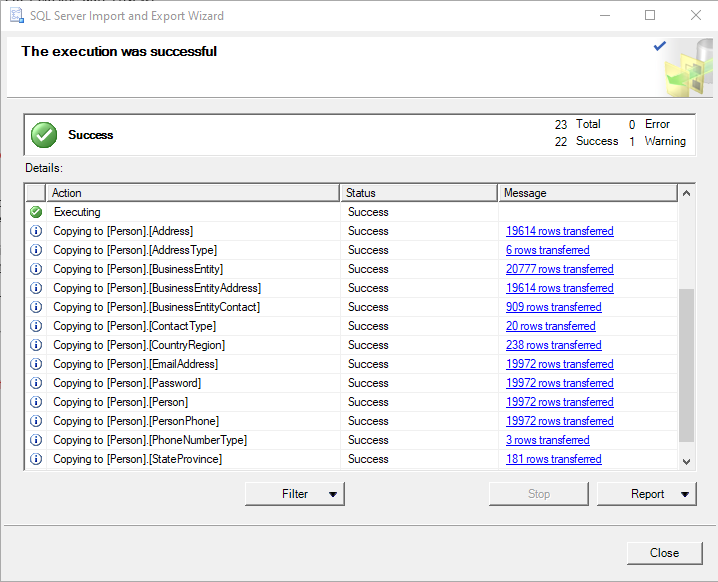 0
How can I create a fresh copy of a large database on SQL Server?
2
Copy database wizard-generated job blows up log file; alternative?
3
search xml column inside large table (7 million rows)
3
Stored procedure suddenly very slow, updating statistics not helping
0
Better approach to optimize query
0
What is the best way to remove large amount of data from large tables?
3
Copy tables to another SQL Server keeping the identity property
0
What is the most efficient method to copy a linked server table into a SQL Server Database?