Referencing this blog post by Erik Darling on the website of my favorite SQL Server guru - Brent Ozar:

When you select from that table alone, it shows "CouldNotGenerateValidParallelPlan".

But, when you join that table to another that does not have a check constraint/computed column calling a Scalar UDF, the query goes parallel with "Good Enough Plan Found"

You need a non-trivial plan if you want parallelism, plus the optimizer must be able to find a valid parallel plan for the query.

For example, modifying your first query (which did not use parallelism):

I changed the SELECT * to SELECT COUNT_BIG(*) there to avoid projecting the column with the scalar UDF constraint. I also added a WHERE clause complex enough to skip the trivial plan stage.

Your second query (which did go parallel) can be modified to be always serial due to the constraint: 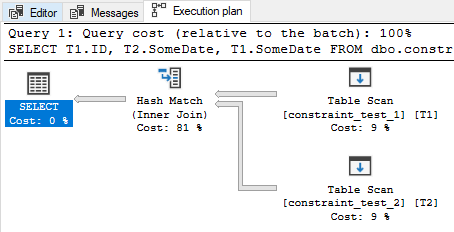 I added T1.SomeDate to the projection list, so the problematic column is now used by the query. When the column is not needed, the constraint on it is disregarded by the optimizer, so it can find a parallel plan.

The NonParallelPlanReason show plan attribute may be added early in compilation when the process detects a condition that would prevent parallelism. For example, the following query produces the reason ParallelismDisabledByTraceFlag:

The presence of a non-parallel reason does not mean parallelism would definitely have been considered otherwise. The optimizer only considers parallelism after the trivial plan stage, optionally search 0, and definitely search 1. For more information on optimizer stages please see my Query Optimizer Deep Dive series.

You mentioned in a comment that you are interested in the behaviour of computed columns referencing scalar functions with parallelism. I describe this in Properly Persisted Computed Columns.

Finally, not a particular concern here, but if you want to test things like this you're better off doing it in a real user database not tempdb. There are several things that work differently in tempdb.

3
SQL Server parallelism issue
11
Is support for Parallel Scalar UDF a reasonable feature request?
2
deteriorating stored procedure running times
0
Scalar UDF causing performance issues in SQL Server
3
SQL Server Threads and Degree Of Parallelism
31
Is there a way to prevent Scalar UDFs in computed columns from inhibiting parallelism?
7
In SQL Server, is parallelism per operator, or something else?
4
What is the current state (2022) of using UDFs in a CHECK constraint in SQL Server?