How to design sales model for escrow type payment process

I need advice for best sales model for payment process. Basically my system is kind of market place. There is two kind of transaction.

So for the single order, we need to do two transaction. But Paypal offers Delayed Chained payment option to do in single transaction as below.

But I am not sure other major payment gateways are proving this option or not. So I want to design the database compatibly for both.

Note: I want to notify customer after paid at this time I don't know who will be seller. After certain point of time administrator will choose the seller and admin will release the pay to seller. Here I want send notification for both seller and customer.

From above, I need to use unique order_id for both transaction. So should i split the order into two and store as two records or can I manage it in single order row. Advice me reliable and better design pattern for this two kind of situation. 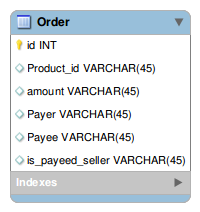 I find with financial transactions you want to have a detailed audit trail of every movement of funds. This means a write-once (no updates) table containing fund movements using a double entry accounting model.

In a simple version of this, you would have one table containing the list of payees and payers (your senders, administrators and receivers). Then you would have another table (or better two) that contain the financial transactions. The tables are roughly as follows:

When someone makes a simple payment you record one TRANSACTION and two TRANSACTION-DETAIL records. The first record shows who paid and the second shows who was paid. The sum of the amounts for the two details must be zero, that means you need to pick a convention for positive and negative Amounts such that one means giving money and the other means getting money.

If the transaction is more complicated, you just add more TRANSACTION-DETAIL records, for example instead of one person getting paid, you get two people being paid (administrator and seller for example).

While the sum of transaction detail amounts for any transaction is zero, the sum of amounts for any given PARTY may be non-zero, meaning you have some of their money in your system. To clear these amounts, you need a PARTY representing any payment settlement organization or bank that you deal with. These are the ultimate sources and sinks of funds and their balances don't need to be zero in the long run.

All of this may seem complicated, especially compared to what you were thinking of, but the advantage of it is that it allows you to keep a detailed record of exactly what happened and when it happened. If you need to make an update, i.e. cancel and order or issue a credit note, just add more transactions and transaction details. You can always go back and see exactly what went on. This convention is how people have been handling and accounting for financial transactions for hundreds of years, so if nothing else, people will understand what you're doing.

Here is an example with some data. In this example, Buyer X pays 100.00 for an order. The Agency collects 10.00 and pays Seller 1 40.00 and Seller 2 50.00. They buyer pays with PayPal and the Agency and both Sellers deposit their money in one of two banks. Note that this example is quite simple insofar as the agency and the sellers clear out their accounts after just one order. In a real-world scenario, payments for many orders might be batched up before settlement is made. 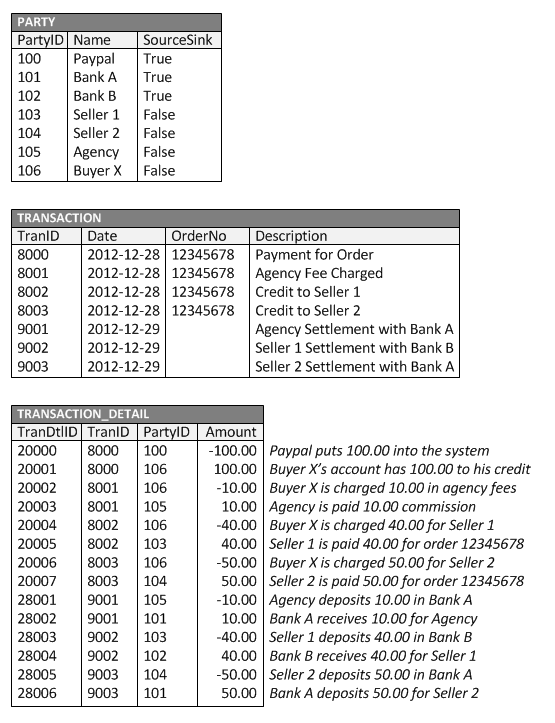