What scope(s) is “hasMany” a part of?

I realize, when talking about structures, obviously if you say "post hasMany comments" there are many records about comments relating to each post.

What I don't understand is what context these sort of terms are used in. I'm thinking mainly only in DBAL or talking about design. In any case, when one thing "hasMany" of another how and where does it show up?

In any case, when one thing hasMany of another how/where does it show up in application and database logic?

The only way I can think to answer this question is with another example of hasMany that may or may not answer your question. 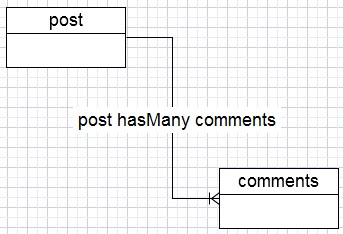 err, except I should have called the table "comment" but I think the point stands.

I don't know that this really helps you understand anymore than what you already had.

which we expect to return many rows, because one post generally has many comments (in theory, of course not all posts will have comments)

So here's the thing about relations: They are EASY to model via diagram (see the very first tool I pulled out to answer this question) but they are HARD to diagram via text. So instead of trying to define whether we mean 1:M or 0:N, we just write it in "near English" and say what we intend. Here's some alternatives:

As you see they can get quite complicated. This would ... once again! ... indicate a need to refactor your business logic into simpler and smaller chunks.

These can also be called "association types" and may be indicated by verbage like "WrittenBy" (a many to one) or "IsOwnedBy" (one to one? - context is key)

Before I walk away from the "hasMany" concept for the last time (well this is an update, more will likely be written) I want to mention that while it's useful for "plain English descriptions", it's also used in ActiveRecord styled installations. Take, for instance, Ruby. http://api.rubyonrails.org/classes/ActiveRecord/Associations/ClassMethods.html The rest of this post (so far) is taken from that page:

This allows the ActiveRecord ORM to create the data model and to maintain the relationships as specified by the business logic within the program. But I don't write Ruby or Rails so that's as far as I can tell you, I just know that it exists there.

Not the answer you're looking for? Browse other questions tagged database-design relational-theory terminology or ask your own question.

8
Appropriate multi-language schema, or overkill?
2
Referential Integrity - Re-using table
0
Index optimization
4
Implementing a one to zero or one relationship
1
Understanding how relationship sides works
26
Why the term “relation(al)”?
1
Best way to associate multiple records with one another
1
Is it better to omit associative tables in displaying many to many relationship