We had a bunch of crashes and restorations a few days ago and following those, the SQL Server DB has been acting strangely. We know that there were some issues with the failover clusters due to which we've had to boot the servers again to finally get the database seemingly working.

One of the problems following that is that, we ran a big script that dynamically dropped existing indexes and re-created them with the only difference being that they were now filtered with WHERE column NOT NULL. For some reason however, when I pick the SCRIPT INDEX -> CREATE TO -> NEW QUERY WINDOW from SSMS Object Explorer, it offers the basic index creation script where the index is NOT filtered. When our customer with full permissions does the same, the creation script correctly shows that it's filtered.

Could this be a permission issue (didn't find any such on Google), or is there a possibility that while the script logged the changes correctly, the nodes or the query optimizer or whatever is somehow out of sync?

Similarly, several queries that previously performed fine (and still perform fine in a different DB that's a copy of this one), now show through execution plan that they're behaving differently. One of them has for example the following issues:

What could possibly be the cause of these issues and how to even begin to diagnose the problem? As said, the databases are copies of each other. The only difference is that the problem DB crashed where the DB was moved to a failover cluster and was then returned to the correct node again. The indexes are not fragmented, the statistics have just been updated, and there seems to be an extreme load from SQL Server's query planner.

I would really appreciate some expert advice on what could be the cause and how I would go about to diagnose the actual problem, thanks.

For some reason however, when I pick the SCRIPT INDEX -> CREATE TO -> NEW QUERY WINDOW from SSMS Object Explorer, it offers the basic index creation script where the index is NOT filtered. 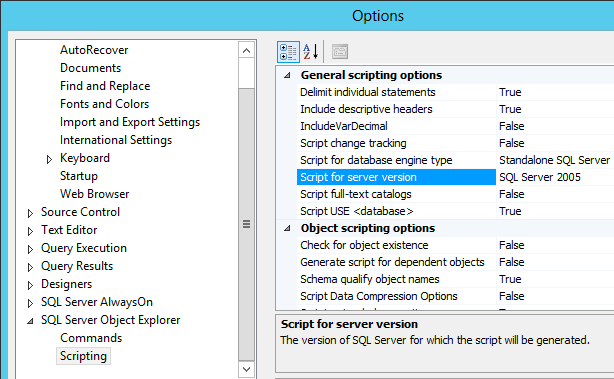 2005 didn't support filtered indexes, so it leaves out the WHERE clause on purpose. Make sure that is set to 2008 or better and try again.

For the queries that are performing differently, are you sure the databases are identical? Do they use these indexes, that are filtered on one system and not on the other? Are both databases set to the same compatibility level? Have you updated statistics on the copy? Have you performed any index maintenance? Has the data skewed? Have you tried recompiling the queries with the largest behavioral changes?

(These are all formed as questions but you can interpret them as rhetorical and quasi-suggestions.)

Not the answer you're looking for? Browse other questions tagged sql-server-2008 performance clustering or ask your own question.

6
Can filtered indexes help improve queries that are based on a time entered or should this be avoided?
5
SQL Server 2008 Maintenance Plan Failure
4
SQL Server 2008 query planner failing after index drop & recreate
0
SQL Server 2008 - Question about index behaviour
4
Why does my query end up with two seeks instead of one and how do I fix that?
1
intermittent performance issue - query with multiple CTE and trashed execution plan
10
Filtered index only used when the filtered part is in the JOIN not the WHERE
1
I would like to understand better the difference between “sql server stand alone” and “sql server failover instance”