I want to have python3 in my postgresql database for writing stored procedures.

Being in the psql client, when I enter the command create extension plpython3u I get the error:

I have checked, there are plpythonu.control and plpython2u.control in the directory, but not the one for version 3.

However I have installed the packages python3 and python3-postgresql (among others) from depot. I'm using Ubuntu 12.04, kernel 3.2.0.38, with postgresql 9.1 installed.

What should I install (or do) to have the plpython3u.control file on my machine and have python3 available in my database?

The package to install is postgresql-plpython3.

By way of dependencies, this will install postgresql-plpython3-9.1, which provides these files:

and then you can do:

You get this message whenever you create an extension that is not available. I had the same error when running the CREATE EXTENSION plpython3u with a spelling mistake.

One other idea is that you need the right Python version. The right version differs between Windows and Linux. Normally, you should not install the exact version yourself but rather use installers (Windows: EDB and Stack Builder --> Language pack, Linux: Follow PostgreSQL: how to install plpythonu extension.

In case of using a Windows installer, you need to install the right Python version that fits your PostgreSQL version and also set the PATH variables of Python (at least, that is needed on Windows as well, though this should be done automatically with the Python installation anyway).

On Windows, you look up C:\Program Files\PostgreSQL\13\doc\installation-notes.html to find the needed Python version to be installed for the installed PostgreSQL version. In my case, with PostgreSQL 13:

Welcome to the PostgreSQL 13 Installation Wizard.

The procedural languages pl/Perl, pl/Python, and pl/Tcl are included in this distribution of PostgreSQL. The server has been built using the LanguagePack community distributions of those language interpreters. To use any of these languages from within PostgreSQL, download and install the appropriate interpreters and ensure they are included in the PATH variable under which the database server will be started. The versions used are shown below - newer minor (bugfix) releases may also work, but have not been tested: 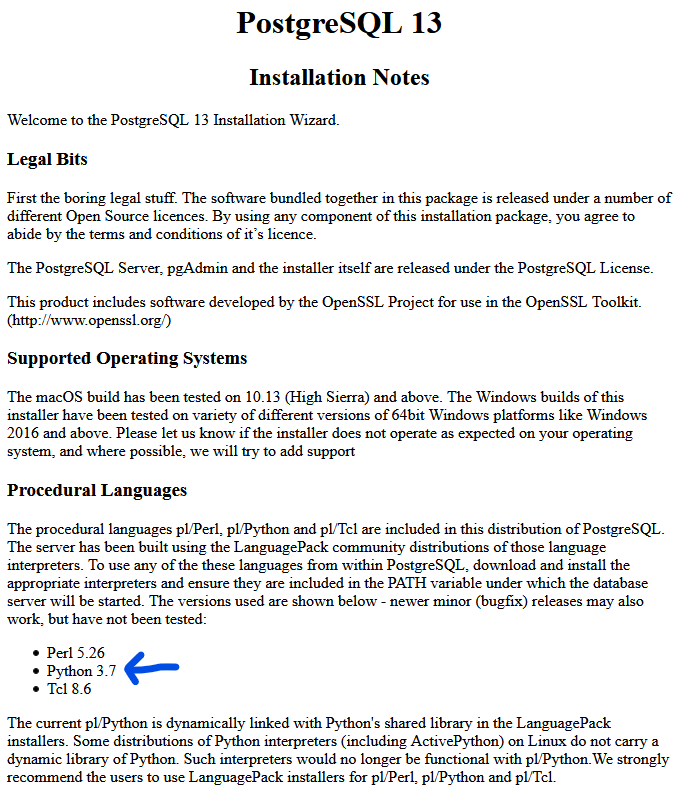 Thus, Python 3.7 is needed on Windows.

I took this from a Windows PostgreSQL + plpython3u installation overview at Stack Overflow PostgreSQL 13 + Python 3.7.9 + plpython3u: 'psql: server closed the connection unexepectedly.' + 'The application has lost the database connection.'.

On Linux, I could not find such an installation-notes.html file with the needed Python version as you find it on Windows.

Checking the Python version directly as a stored procedure in PostgreSQL with plpython3u already installed:

shows that for "PostgreSQL 13", "Python 3.8.10" gets installed. The Linux installer seems to get more attention than the Windows installer and might therefore have a more recent Python version.

Thus, in 9/2021, you need to have installed Python 3.8.10 to make this extension work. It should be automatically installed by the linux installer, though, but you can at least check with this whether you are on the right way, you should find it with:

Not the answer you're looking for? Browse other questions tagged postgresql postgresql-9.1 python postgresql-extensions or ask your own question.

3
Create database on new partition
0
Recovering Postgres database
1
Problems while connecting to a newly installed PostgreSQL 9.2 on same box as 9.1
1
After installing postgresql and postgres-xc with apt-get, I have psql but not postgres, initdb, pg_ctl
1
Difficulty with Postgis extension on Ubuntu 14.04
3
Have: Postgres database files. Need: Functioning database
0
postgresql.conf file found in both /usr/share/postgresql and /etc/postgresql/
0
Postgresql install extension
1
How to package a PostgreSQL extension as a binary .deb file in Ubuntu?