Since this question keeps getting views, I'll summarize it here so newcomers don't have to suffer the history:

I realize this might not be everyone's problem, but by highlighting the sensitivity of the ON clauses, it might help you look in the right direction. In any case the original text is here for future anthropologists:

This is a pretty simple query, the only confusing part is the last category join, it's this way because category level 5 might or might not exist. At the end of the query I am looking for category info per product ID (SKU ID), and the that's where the very large table category_link comes in. Finally, the table #Ids is just a temp table containing 10'000 Ids.

When executed, I get the following actual execution plan:

As you can see, almost 90% of the time is spent in the Nested Loops (Inner Join). Here's extra information on those Nested Loops: 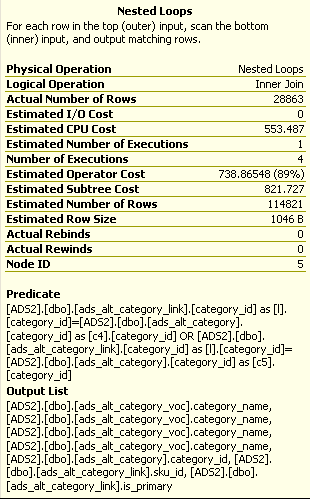 Note that the table names don't match exactly because I edited the query table names for readability, but it's pretty easy to match (ads_alt_category = category). Is there any way to optimize this query? Also note that in production, the temp table #Ids doesn't exist, it's a Table Valued Parameter of the same 10'000 Ids passed on to the Stored Procedure.

As pointed out by the accepted answer, the problem was the OR clause in the category_link JOIN. However, the code suggested in the accepted answer is very slow, slower even than the original code. A much faster and also much cleaner solution is simply to replace the current JOIN condition with the following:

The problem appears to be in this part of the code:

or in join conditions is always suspicious. One suggestion is to split this into two joins:

You then have to modify the rest of the query to handle this . . . coalesce(l1.sku_id, l2.sku_id) for instance in the select clause.

As another user mentioned, this join is likely the cause:

Besides splitting these out into multiple joins, you can also try a CROSS APPLY

From the MSDN link above:

Basically, APPLY is like a subquery that filters out records on the right first, and then applies them to the rest of your query.

This article does a very good job of explaining what it is and when to use it: http://explainextended.com/2009/07/16/inner-join-vs-cross-apply/

It's important to note, however, that the CROSS APPLY does not always perform faster than an INNER JOIN. In many situations, it will probably be about the same. In rare cases, though, I've actually seen it slower (again, this all depends on your table structure and the query itself).

As a general rule of thumb, if I find myself joining to a table with way too many conditional statements, then I tend to lean toward APPLY

Also a fun note: OUTER APPLY will act like a LEFT JOIN

Also, please take note of my choice to use EXISTS rather than IN. When doing IN on a subquery, remember that it will return the entire result set, even after it has found your value. With EXISTS, though, it will stop the subquery the instant it finds a match.

6
Index scan of table with one record with 2.2 billion executions

11
Syntax of INNER JOIN nested inside OUTER JOIN vs. query results
2
What are the side-effects of disabling nested loops in postgres?
0
How to lift a nested windowed query from a left outer join?
3
Crosstab Pivot or not?
0
On the query planners's reasons for choosing merge joins vs nested loops
11
Why does nested loops join only support left joins?
4
Optimize a slow nested loops join
12
Why Does the SQL Server Query Optimizer Not Convert an OUTER JOIN to an INNER JOIN When a Trusted Foreign Key Is Present?
2
What does Nested Loops join operator has to do with a Scalar?