I am working on different two SQL Server, I need to transfer database from one server to another but problem is the servers have different versions.

Below is image of error message. 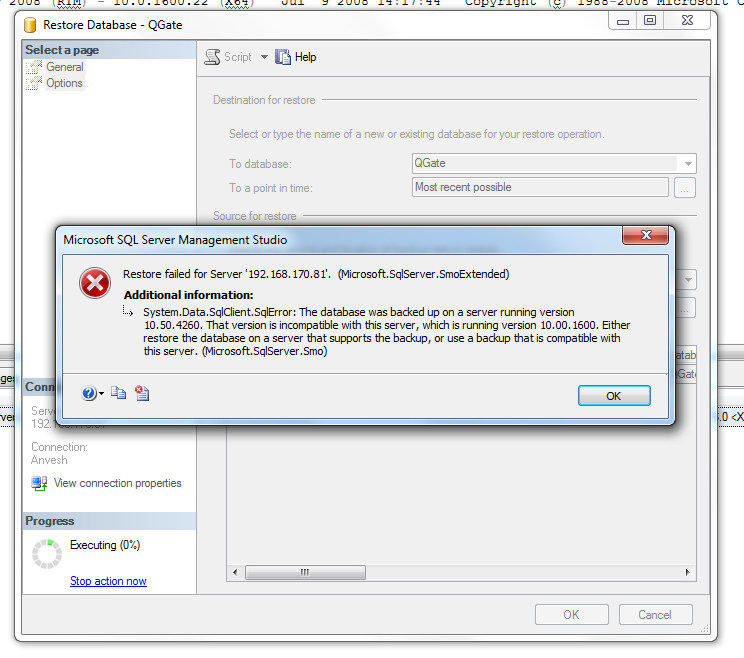 Using SELECT @@Version I have checked database version like below,

How can I do this?

+1 to Doug L., I'd recommend the same (export all data and structure into SQL script and data dumps, then import) but on top of that: if you can connect the two DBs you can cross-server SELECT/INSERT INTO the tables and data from old DB to the new one; you can also try upgrading the RTM server (if you are allowed to do that) - I'm unsure on this but I think if you install SP on the RTM it'll be considered as same version as the other guy.

In the SQL Server Management Studio, right-click your source database, select Tasks, Generate Scripts. Use this to generate the SQL script that will create and populate the objects in the database. There will be several options for selecting the objects, selecting data, targeting a server version, desired output, etc. The resulting script can be run on the target server.

Do not be tempted to use the Copy Database tool within SSMS: it is a massive pain in the behind and requires a LOT of messing about to make it work thanks to its use of SSIS. It should be simple, and indeed it was in SQL Server 2000, but it requires so much security faffing now that it's not really worth the effort. I've lost countless hours trying to make it work reliably.

It's not the easiest or cleanest solution, but I would agree with the previous posters that scripting the entire DB out is your best bet IF you don't have a large DB. If you do then realistically your only option is to upgrade the target server to 2008 R2 (or even 2012). Bear in mind that the Developer Edition of any given SQL Server version is only about £50 (about US$77 right now, and may actually be less than that in US$ markets) and is functionally equivalent to the full Enterprise Edition.

If you're really stuck and can't get the cash, you may be able to use the latest Express Edition (free) and restore to that but check that there is no limited functionality which might impede your development. I could be wrong but I think the Express editions have most of the features of Standard edition but limit DB size and possibly number of connections. You already have SSMS so you can connect straight to your new Express instance.

As an aside, I think MS have put some effort into making the Copy Database wizard better and easier to use in 2012, but I've not tried it yet.

Not the answer you're looking for? Browse other questions tagged sql-server restore or ask your own question.

32
Restoring a backup to an older version of SQL Server

6
Why can't I read my transaction log backup file using fn_dump_dblog?
4
Insert to SQL Azure through Linked Server very slow
2
Differentiate SQL Server Express from SQL Server installed in a server
3
Mirror db from production to test and acceptance nightly or weekly
3
Why is SQL Profiler showing empty for database name and database id?
1
Can I restore a database, from the same version SQL server, with different updates?
21
Why is this explicit cast causing problems only with a Linked Server?
1
Database Backup compression
2
SQL Server Restore Failing with Error Read on “M:\MSSQL\My_FULL_Backup_20190924_010558.bak” failed: 1101(A tape access reached a filemark
7
AlwaysOn High Availability doesn't work , can't activate it