I have a performance problem related to SQL Server/linked servers/views. I hope you can help me understand what is the best way to do what I want =).

After some testing, this is the situation:

I'm interested in improving performance in case 2 because I need a view to map with nHbinernate in our software...

Thanks in advance, regards

Ok, I try but with no results. I'm not a DBA and my skills on DB configuration is really limited. Can we proceed step by step?

When i run the query across L1 without a VIEW I have good result, If I put the query in a VIEW low performace, nothing have changed...

I think I did some step wrong, but I don't know where...

This is the query I run without a view using linked server:

into the view I put only this code

I think this is absurd!

The execution plan with plain query, without the use of a view: 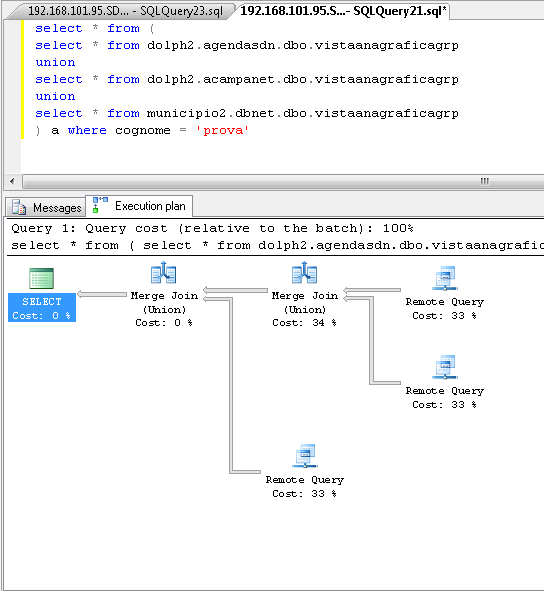 the execution plan using the view: 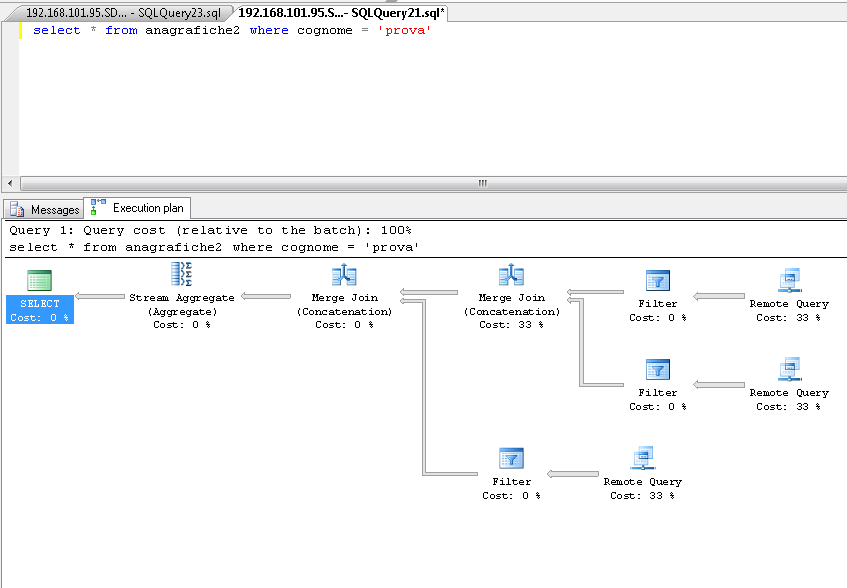 Your problem begins and ends with statistics and estimates. I have reproduced your situation on my servers and found some interesting hints, and a workaround solution.

First things first, let's take a look at your execution plan:
When a view is used we can see that a filter is applied after the Remote Query is executed, while without the view there was no filter applied at all. The truth is that the filter was applied inside the Remote Query, at the remote server, before retrieving the data over the network.
Well, obviously applying the filter at the remote server and thus retrieving less data is a better option, and obviously that only happens when not using a view.

Surprisingly, when I changed the filter from cognome = 'test' to cognome = N'test' (unicode representation of the string) the view used the same execution plan as the first query did.
I guess the reason is that somehow when using the view SQL Server estimated that there will be a small number of rows returning from the (remote) query, and that a local filtering will be cheaper, but when SQL Server had to implicit convert NVARCHAR to VARCHAR, statistics could no longer be used and the decision to filter locally was not taken.
I have looked for the statistics locally, but the view had no statistics, so my guess is that the view uses the remote statistics in a way that ad-hoc query does not, and than takes the wrong decision.

OK, so what solves the problem?

I stated earlier that there is a workaround (at least until someone comes up with a better solution), and no, I don't mean using unicode for your strings.
I wanted to give an answer first, I still have to find why, but when using an Inline Function SQL Server behaves exactly the same as with the query (without view), so replacing the view with the function will give the same result, in a simple query, and with good peformance (at least in my environment).

My code suggestion for you is:

The query will then be:

This works on my servers, but of course test it first.
Note: I do not recommend using SELECT * at all, as it is prone to future errors, I simply used it because it was in your question and there was no need for me to change that when I can add this remark instead :)

There is a fundamental restriction when it comes to linked servers and statistics: you can only see them if you have one of the following permissions on the remote location:

Usually you are just data reader, who can see no statistics (not even histograms). Execution plans then tend to suffer.

This has been fixed in SQL Server 2012 SP1, but it is of no comfort to legacy code running on older versions.

The trick I do is as follows:

Not the answer you're looking for? Browse other questions tagged sql-server performance view linked-server query-performance or ask your own question.