I have recently set up SSDT for our developers to use. We enforce changes to our dev databases are made through SSDT by limiting the permissions that each developers has when connected to the server (db_datareader, db_datawriter). Within SSDT we publish our changes to the database using a deployment script which connects using a log on with elevated permissions.

My question. Given that we have gone to this length to lock down the database (to stop schema drift); is there any way that the developers can view the diagrams on this database without having to have db_owner permission? I know that each developer can create and view his or her own diagrams but i want them to be able to view all of the diagrams, which have been created by many different developers.

Any help will be greatly received.

So it seems that you won't be able to do it with lower roles like db_datareader.

Behind the scenes, here is what Management Studio is calling to drive the list:

So you can see this matches the documentation.

Now a couple of workaround ideas:

After creating a couple of diagrams, here is what an abridged version of Object Explorer looked like for these users: 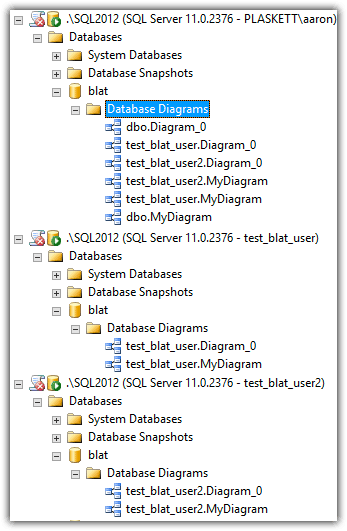 Now, dbo will collect a whole bunch of copies of diagrams, which maybe isn't necessary, but you probably want those to be the "master" in most circumstances.

As per BOL, an account with database owner dbo privileges is required. More info here.

So, the user who created it, or a member of the db_owner role can open diagrams.

3
User can alter procedures without permission
2
Why are users allowed to connect to SQL Server when creating sql account, that defaults login to 'master" for login
25
DDL_admin vs db_owner permissions
8
DACPAC and database drift: db users are always detected as drift even when nothing has changed
2
Cannot find the object because it does not exist
2
Get list of databases accessed by a particular SQL Server login
2
db_datawriter vs grant delete, update, insert