No. Neither Full or Differential backups truncate the transaction log. - Lynn Pettis
No - a full backup does not truncate the log. - Chad Crawford

So what is the difference between full backup and copy-only full backup?

At the very least you need to consider differential backups. Unless copy-only on the full is used, your next diff backup will be off. Copy-Only Backups:

The key difference between Full and Copy-only backups is whether or not the LSN (Log Sequence Number), and specifically the DatabaseBackupLSN is updated.

The problem comes when you have scheduled backups running, so you have an initial Full backup, and then a sequence of Differentials. If you manually take a Full backup it will update the LSN, and then from that point onwards each Differential backup you take via scheduled backup will reference that new LSN not the original one. In the event of needing to restore, you could restore your scheduled Full backup, but when you tried to restore any of the Differential backups taken after the manual job you'd find it would fail as the LSNs no longer match.

With a Copy-only backup it doesn't touch the DatabaseBackupLSN, and as such doesn't break that chain of backups.

There's a good description of the issue, as well as why so many people misunderstand it in Breaking the Backup Chain – REDUX (Or Eating Crow) by Michael K. Campbell (archive with all images), which includes good visual guides like this one: 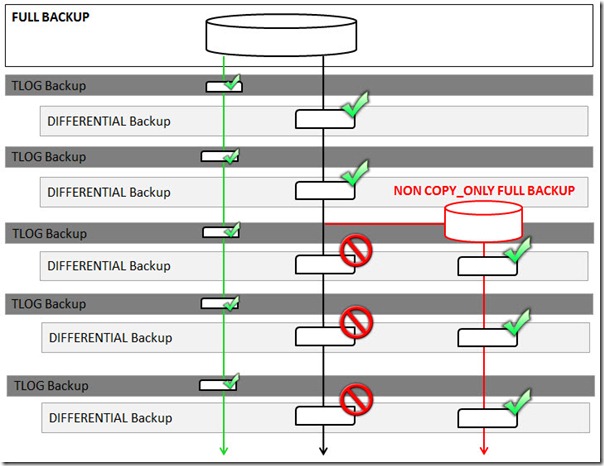 For a good explanation of the four different LSNs and how they're used, have a look at Understanding SQL Server Log Sequence Numbers for Backups by Simon Liew.

The way to avoid the issue is to not have more than one thing doing standard backups of a database. Any adhoc or secondary backups should be done with the copy-only option, see Copy-Only Backups (SQL Server) for full details, but essentially you use the "Copy Only Backup" option in SSMS, via T-SQL specify WITH COPY_ONLY in the command, or with PowerShell use the -CopyOnly parameter.

But when you make a backup of a database, there are some changes that influence how the following backups are going to be restored (differential backups and transaction log backups both influence how the restore operation will be). In this case, all following differential backups will be dependent on the last full backup. If the last full backup is lost the database restore is impossible.

But how can we make a backup that will not affect the following processes of backup or restore for that database. This is where copy-only backups come into place.

When you have a full backup and a set of log file backups, a log chain is maintained using the LSN (Log Sequence Number). If you want to do a backup without breaking the log chain, then do a copy-only backup.

If you do not do a copy-only backup, the log chain is broken and the backup you take will be the latest full backup. This means that the previous log backups cannot be applied to the newly taken full backups. The log chain is mostly maintained for point in time recoveries or log shipping scenarios.

For example: say you have a backup scenario that takes full backups every 6 hours (midnight, 6 am, noon, 6 pm) and log backups every 15 minutes. A request comes in at 9 am to have a copy of your DB placed on a test server. You want to take the backup without breaking your log chain or disrupting your backup jobs. This is when a copy-only backup is taken. The copy only backup will not disrupt your regular backup sets.

A full backup and copy only backup do not break the log chain. only if you do a tlog backup will there be an LSN mismatch.

Not the answer you're looking for? Browse other questions tagged sql-server sql-server-2008-r2 backup transaction-log or ask your own question.