I've often read when one had to check existence of a row should always be done with EXISTS instead of with a COUNT.

Yet in several recent scenarios I've measured a performance improvement when using count.
The pattern goes like this:

I'm not familiar with methods to tell what's happening "inside" SQL Server so I was wondering if there was a unheralded flaw with EXISTS that gave perfectly sense to the measurements I've done (could EXISTS be RBAR?!).

Do you have some explanation to that phenomena?

Here's a full script you can run:

I've often read when one had to check existence of a row should always be done with EXISTS instead of with a COUNT.

It's very rare for anything to always be true, especially when it comes to databases. There are any number of ways to express the same semantic in SQL. If there is a useful rule of thumb, it might be to write queries using the most natural syntax available (and, yes, that is subjective) and only consider rewrites if the query plan or performance you get is unacceptable.

For what it's worth, my own take on the issue is that existence queries are most naturally expressed using EXISTS. It has also been my experience that EXISTS tends to optimize better than the OUTER JOIN reject NULL alternative. Using COUNT(*) and filtering on =0 is another alternative, that happens to have some support in the SQL Server query optimizer, but I have personally found this to be unreliable in more complex queries. In any case, EXISTS just seems much more natural (to me) than either of those alternatives.

Your particular example is interesting, because it highlights the way the optimizer deals with subqueries in CASE expressions (and EXISTS tests in particular).

The semantics of CASE are that WHEN/ELSE clauses are generally evaluated in textual order. In the query above, it would be incorrect for SQL Server to return an error if the ELSE subquery returned more than one row, if the WHEN clause was satisfied. To respect these semantics, the optimizer produces a plan that uses pass-through predicates:

CASE expressions with an EXISTS subquery

Where a CASE subquery uses EXISTS, the logical existence test is implemented as a semi-join, but rows that would normally be rejected by the semi-join have to be retained in case a later clause needs them. Rows flowing through this special kind of semi-join acquire a flag to indicate if the semi-join found a match or not. This flag is known as the probe column.

The details of the implementation is that the logical subquery is replaced by a correlated join ('apply') with a probe column. The work is performed by a simplification rule in the query optimizer called RemoveSubqInPrj (remove subquery in projection). We can see the details using trace flag 8606:

Part of the input tree showing the EXISTS test is shown below:

This is transformed by RemoveSubqInPrj to a structure headed by:

This is the left semi-join apply with probe described previously. This initial transformation is the only one available in SQL Server query optimizers to date, and compilation will simply fail if this transformation is disabled.

One of the possible execution plan shapes for this query is a direct implementation of that logical structure:

The final Compute Scalar evaluates the result of the CASE expression using the probe column value:

The basic shape of the plan tree is preserved when the optimize considers other physical join types for the semi join. Only merge join supports a probe column, so a hash semi join, though logically possible, is not considered:

Notice the merge outputs an expression labelled Expr1008 (that the name is the same as before is a coincidence) though no definition for it appears on any operator in the plan. This is just the probe column again. As before, the final Compute Scalar uses this probe value to evaluate the CASE.

The problem is that the optimizer doesn't fully explore alternatives that only become worthwhile with merge (or hash) semi join. In the nested loops plan, there is no advantage to checking if rows in T2 match the range on every iteration. With a merge or hash plan, this could be a useful optimization.

If we add a matching BETWEEN predicate to T2 in the query, all that happens is that this check is performed for each row as a residual on the merge semi join (tough to spot in the execution plan, but it is there): 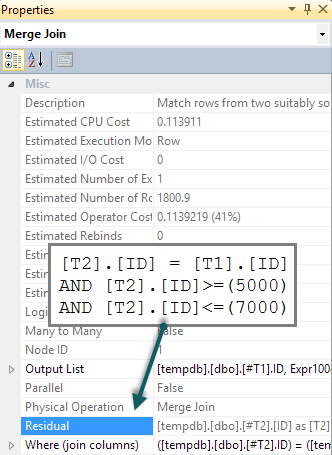 We would hope that the BETWEEN predicate would instead be pushed down to T2 resulting in a seek. Normally, the optimizer would consider doing this (even without the extra predicate in the query). It recognizes implied predicates (BETWEEN on T1 and the join predicate between T1 and T2 together imply the BETWEEN on T2) without them being present in the original query text. Unfortunately, the apply-probe pattern means this is not explored.

There are ways to write the query to produce seeks on both inputs to a merge semi join. One way involves writing the query in quite an unnatural way (defeating the reason I generally prefer EXISTS):

I wouldn't be happy writing that query in a production environment, it's just to demonstrate that the desired plan shape is possible. If the real query you need to write uses CASE in this particular way, and performance suffers by there not being a seek on the probe side of a merge semi-join, you might consider writing the query using different syntax that produces the right results and a more efficient execution plan.

The "COUNT(*) vs EXISTS" argument is to do with checking whether a record exists. For example:

Your SQL script isn't using COUNT(*) as a record exist check, and therefore I wouldn't say that its applicable in your scenario.

2
Which of these queries is best for performance?
4
Every query plan statistic says my query should be faster, but it is not
6
New query slower even if it has less logical reads than the old one
1
Procedure showing different duration / reads in Profiler vs. SSMS
4
Aggregation in Outer Apply vs Left Join vs Derived table
3
sqlpackage.exe SELECT statement causing massive reads
5
High processor utilization when running a stored procedure