Using the sorting dictated by the clustered indexing on primary keys, I have generated a unique ID for each household [HHID] and each person [PERID] record (the snippet below is for generating PERID]:

Now, my next step is to associate each person with the corresponding households ie; map a [PERID] to a [HHID]. The crosswalk between the two tables is based on the two columns[tempId,n]. For this I have the following inner join statement.

I have a total of 1928783 household records and 5239842 person records. The execution time is currently very high.

I have uploaded the execution plan generated by SQL Server 2008 for the whole script to SQLPerformance.com

I'm pretty certain the table definitions are close to this:

I don't have statistics for these tables or your data, but the following will at least set the table cardinality correct (the page counts are a guess):

The query you have now is:

This generates the rather inefficient plan:

The main problems in this plan are the hash join and sort. Both require a memory grant (the hash join needs to build a hash table, and the sort needs room to store the rows while sorting progresses). Plan Explorer shows this query was granted 765 MB: 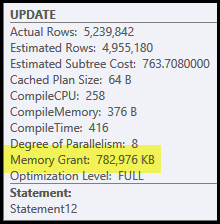 This is quite a lot of server memory to dedicate to one query! More to the point, this memory grant is fixed before execution starts based on row count and size estimates.

If the memory turns out to be insufficient at execution time, at least some data for the hash and/or sort will be written to physical tempdb disk. This is known as a 'spill' and it can be a very slow operation. You can trace these spills (in SQL Server 2008) using the Profiler events Hash Warnings and Sort Warnings.

The estimate for the hash table's build input is very good:

The estimate for the sort input is less accurate:

You would have to use Profiler to check, but I suspect the sort will spill to tempdb in this case. It is also possible that the hash table spills too, but that is less clear-cut.

Note that the memory reserved for this query is split between the hash table and sort, because they run concurrently. The Memory Fractions plan property shows the relative amount of the memory grant expected to be used by each operation.

Why Sort and Hash?

The sort is introduced by the query optimizer to ensure that rows arrive at the Clustered Index Update operator in clustered key order. This promotes sequential access to the table, which is often much more efficient than random access.

The hash join is a less obvious choice, because it's inputs are similar sizes (to a first approximation, anyway). Hash join is best where one input (the one that builds the hash table) is relatively small.

In this case, the optimizer's costing model determines that hash join is the cheaper of the three options (hash, merge, nested loops).

The cost model does not always get it right. It tends to over-estimate the cost of parallel merge join, especially as the number of threads increases. We can force a merge join with a query hint:

This produces a plan that does not require as much memory (because merge join does not need a hash table):

The problematic sort is still there, because merge join only preserves the order of its join keys (tempId, n) but the clustered keys are (tempId, n, sporder). You may find the merge join plan performs no better than the hash join plan.

We can also try a nested loops join:

The plan for this query is:

This query plan is considered the worst by the optimizer's costing model, but it does have some very desirable features. First, nested loops join does not require a memory grant. Second, it can preserve the key order from the Persons table so that an explicit sort is not needed. You may find this plan performs relatively well, perhaps even good enough.

The big drawback with the nested loops plan is that it runs on a single thread. It is likely this query benefits from parallelism, but the optimizer decides there is no advantage in doing that here. This is not necessarily correct either. Unfortunately, there is no built-in query hint to get a parallel plan, but there is an undocumented way:

Enabling trace flag 8649 with the QUERYTRACEON hint produces this plan:

Now we have a plan that avoids the sort, requires no extra memory for the join, and uses parallelism effectively. You should find this query performs much better than the alternatives.

More information on parallelism in my article Forcing a Parallel Query Execution Plan:

Looking at your query plan, it is possible that your real problem may not be the join per se but rather the actual process of updating.

From what I can see, you are likely to be updating all the person records in your database and update indexes (I can't see what other indexes this has so I don't know whether that could be a factor)

If this is a one-off task, could you disable the indexes, run the update and rebuild the indexes?

Once you have the data populated, you can add a where clause to your query to only update those records that need updating

Not the answer you're looking for? Browse other questions tagged sql-server optimization join execution-plan or ask your own question.

0
Simple left outer join leaving me with inner join
1
How to Create key (to be used in join) using concatenation?
0
Mysql join non-unique columns
7
Hash Match inner join in simple query with in statement
2
Update a table faster than an INNER JOIN
0
SQL Join / union question [beginer]
2
join table and count them SQL based on segment
12
Inner join elimination inhibited by prior outer join
0
How to SELECT DISTINCT records with INNER JOIN?