Does disconnecting the network stop a query?

I recently executed an update query against 100,000 records. I realized I'd made a mistake while the query was running and quickly unplugged the network cable.

Does the update query

As mentioned by Nick and Martin, the eventual status of your query depends on whether SQL Server knows about your network cable pull before the query completed. From Books Online (though I find it interesting that there are equivalent topics for this in 2000, 2005, 2008, and 2008 R2, but not 2012 or 2014):

(As an aside, that word connections in the 2nd last sentence was probably meant to be transactions. I don't know how one rolls back a connection.)

In a similar way, SQL Server may undo or redo transactions during recovery after the server is shut down unexpectedly, and this will depend on the state of the transaction at the moment of shutdown. I have seen people use this tactic to achieve what you were trying to do (cancel the transaction(s)) and when the server started up again much of the work was simply redone (so net effect of their knee-jerk reaction was much closer to zero than they expected).

So rather than be subject to this, instead of doing drastic things in a panic, like yanking a network cable or shutting off the machine, I suggest in the future you have better discipline about running ad hoc queries against important systems. For example, instead of:

Now it could still get you in trouble in the event that you run the query and then don't either commit or rollback, because now your transaction is blocking other users. But this is better then irrevocably modifying data.

And of course, as always, have a backup you can rely on.

@Aaron is correct. Creating a transaction before your commands is your best bet. If you can't remember to do that then one option is to go into the Tools-Options setting and turn on SET IMPLICIT_TRANSACTIONS. This will automatically start a transaction as soon as certain commands are run. This includes UPDATE, DELETE etc. This appears to be a fairly complete list of any command that would "change" something. SELECT is also included in the list and will start a transaction. You can see a full list of the commands that start a transaction will this setting on here. It will not create a transaction if one is already started. Now the down side to this is that you will have to remember to COMMIT after any change made.

NOTE: Based on @Aaron's suggestion I'm going to re-emphasize this. 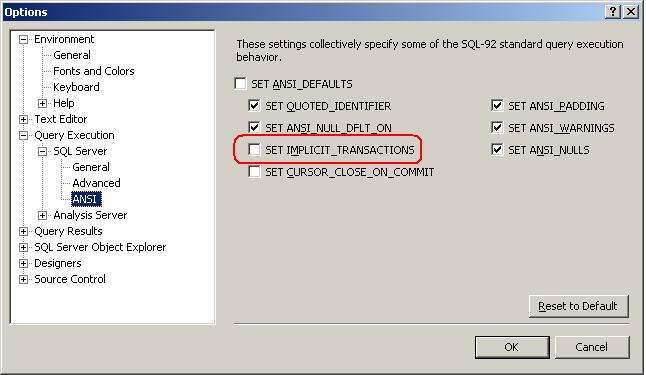 i think it really depends:

if the command already reaches the server before you unplugged the network cable, the command will still continue to execute normally.

Not the answer you're looking for? Browse other questions tagged sql-server network or ask your own question.

13
Disconnect from network without stopping the query
12
What is the effect of having an opened transaction in MSSQL for too long?

4
Odd SQL Server hang when querying exec DMVs
20
T-SQL query using completely different plan depending on number of rows I'm updating
7
Placing an ASSERT in a SQL Server query
13
How are these two SQL Server rollbacks different?
7
SQL Server Rollback being performed - how to stop it?
1
Why does a rollback of a CREATE INDEX statement take longer than expected?
2
MariaDB Galera stop working without network connectivity
1
Query is slow with JDBC parameters, fast with concatenated SQL
2
UPDATE column to MIN of a SELECT result set - what went wrong?
13
Disconnect from network without stopping the query