I have a SQL query that I have spent the past two days trying to optimise using trial-and-error and the execution plan, but to no avail. Please forgive me for doing this but I will post the entire execution plan here. I have made the effort to make the table and column names in the query and execution plan generic both for brevity and to protect my company's IP. The execution plan can be opened with SQL Sentry Plan Explorer.

What I have found is that the third statement (commented as being slow) is the part that is taking the most time. The two statements before return almost instantly.

The execution plan is available as XML at this link.

Better to right-click and save and then open in SQL Sentry Plan Explorer or some other viewing software rather than opening in your browser.

If you need any more information from me about the tables or data, please don't hesitate to ask.

Before getting to the main answer, there are two pieces of software you need to update.

The second piece of software is SQL Sentry Plan Explorer. The latest versions have significant new features and fixes, including the ability to directly upload a query plan for expert analysis (no need to paste XML anywhere!)

The cardinality estimate for the table variable is exactly right, thanks to a statement-level recompilation: 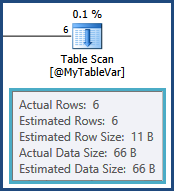 Unfortunately, table variables do not maintain distribution statistics, so all the optimizer knows is that there are six rows; it knows nothing of the values that might be in those six rows. This information is crucial given that the next operation is a join to another table. The cardinality estimate from that join is based on a wild guess by the optimizer: 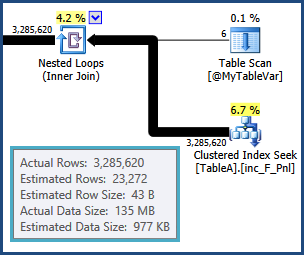 From that point on, the plan chosen by the optimizer is based on incorrect information, so it's no wonder really that performance is so poor. In particular, the memory set aside for sorts and hash tables for hash joins will be far too small. At execution time, the overflowing sorts and hashing operations will be spilled out to physical tempdb disk.

SQL Server 2008 does not highlight this in execution plans; you can monitor the spills using Extended Events or Profiler Sort Warnings and Hash Warnings. Memory is reserved for sorts and hashes based on cardinality estimates before execution starts, and cannot be increased during execution regardless of how much spare memory your SQL Server may have. Accurate row count estimates are therefore crucial for any execution plan that involves workspace memory consuming operations.

Your query is also parameterized. You should consider adding OPTION (RECOMPILE) to the query if different parameter values affect the query plan. You should probably consider using it anyway, so the optimizer can see the value of @Param1 at compilation time. If nothing else, this may help the optimizer produce a more reasonable estimate for the index seek shown above, given that the table is very large, and partitioned. It may also enable static partition elimination.

Try the query again with a temporary table instead of the table variable and OPTION (RECOMPILE). You should also try materializing the result of the first join into another temporary table, and run the rest of the query against that. The number of rows is not all that large (3,285,620) so this should be reasonably quick. The optimizer will then have an exact cardinality estimate and distribution statistics for the result of the join. With luck, the rest of the plan will fall into place nicely.

Working from the properties shown in the plan, the materializing query would be:

You could also INSERT into a predefined temporary table (the correct data types are not shown in the plan, so I cannot do that part). The new temporary table may or may not benefit from clustered and nonclustered indexes.

I notice there should be a PK on @MyTableVar and agree that #MyTableVar is often better performing (esp. with larger number of rows).

The condition within the where clause

should be moved to inner join A AND'ed. The optimizer is not clever enough in my experience to do this (sorry didn't look at plan) and it can make a huge difference.

If those changes do not show improvement I would next create another temp table of A and all the things it joins to constrained (nicely?) by A.A_Var8_FK_LK = @Param1 if that grouping makes logical sense to you.

Then create a clustered index on that temp table (either before or after creation) for the next join condition.

Then join that result to the few tables (F and T) that remain.

Bam, who needs a stinking query plan when the row estimates are off and are sometimes not easily improvable anyway). I'm assuming you have proper indices which is what I would first check within the plan though.

A trace can show the tempdb spills which may or may not have a drastic impact.

Another alternative approach--that is faster to try out at least--is to order the tables from lowest number of rows (A) to highest and then begin adding the merge, hash, and loop to the joins. When hints are present the join order is fixed as specified. Other users wisely avoid this approach because it can hurt in the long run if the relative row counts change dramatically. A minimum number of hints is desirable.

If you're doing many of these, perhaps an commercial optimizer is worth a try (or trial) and is still a good learning experience.

Not the answer you're looking for? Browse other questions tagged sql-server sql-server-2008 t-sql optimization execution-plan or ask your own question.

11
How can row estimates be improved in order to reduce chances of spills to tempdb
9
query performance gains by removing operator hash match inner join
1
intermittent performance issue - query with multiple CTE and trashed execution plan
1
why the queries run by a specific user are slow?

36
How (and why) does TOP impact an execution plan?
1
Why does OBJECT_ID return NULL in a computed column?
8
How to optimize indexes on MySQL query with various sorts
3
SHOWPLAN does not display a warning but "Include Execution Plan" does for the same query
1
intermittent performance issue - query with multiple CTE and trashed execution plan
0
How to improve query count execution with mySql replicate?
2
Conversion failed when converting the varchar value 'TerminatedByCompany' to data type int
12
Why Does the SQL Server Query Optimizer Not Convert an OUTER JOIN to an INNER JOIN When a Trusted Foreign Key Is Present?