What I did was:

Question: What else should I do to make migration complete?

In other words: I just want to know how to correctly and completly convert old SQL 2000 database to new 2008 R2 database, be calm that everything is done right and be happy with all new features.

I'm asking this question, because I've found a lot of sites on the Internet that says so many different things that makes me confused: some say that it is required to rebuild indexes, another says to do other things... and now I know nothing so I want to hear experienced person opinion and clear, step-by-step instructions. I work for very small company, I'm on my own and I don't want to screw things up.

Sir, I'm really impressed with your answer, I wasn't expecting so much.

I know that my questions may sound silly, I'm not professional database admin, but I am the only person here who can do such "hard core" task like upgrading the database engine. I'm also sure that your knowleadge will help a lot to other people like me.

Thank you very much for your time and knowleadge, I really appreciate this.

The foremost step to do is to run the Upgrade Advisor on SQL Server 2000 database and address all the issues reported by it.

So the rest of the steps would be :

On the day of migration :

Also, you can use my script found at https://dba.stackexchange.com/a/36701/8783. Though, it uses detach/attach method, I highly recommend you to use BACKUP/RESTORE method. Change the script accordingly.

As a side note:

What else should I do to make migration complete?

Refer to my answer. It will help you properly come up with a migration plan. Always test your migration plan in a UAT (non production) along with proper application testing by business users.

use new features like checksumming and full recovery model.

CHECKSUM is new in SQL Server 2005 and up. I have covered it as a part of migration steps described above.

full recovery model is not new. It depends on your business type and dictates on how much data you can lose in case of disaster.

Full recovery mode with frequent Transaction log backups will allow you to restore point-in-time and there by reducing the amount of data loss.

make this database to be exactly as it was created in SQL Server 2008 R2.

make this database to be fully compatible, correct and be perfect suited for new, SQL 2008 R2 database engine.

Don't fully understand this ! But above migration steps will help you. You just have to restore the database and change the compatibility level 10 100 along with above steps.

I just want to know how to correctly and completely convert old SQL Server 2000 database to new 2008 R2 database, be calm that everything is done right and be happy with all new features.

You have to be careful with this, as this will require changes to your application code as well. If your application code is changed to use the new features in SQL Server 2008 R2, then you wont be encountering any issues - PROVIDED you have fully done a complete regression testing of your application in a UAT or DEV environment. This will give you best confidence when you do the actual migration in PROD.

Note: Above are steps that I could remember and I am pretty sure that nothing is left out. If I see that I have missed some stuff, then I will add it or other experts on this site -- feel free to add !

Everything that is outlined above needs to first replayed on a NON PRODUCTION environment to avoid any surprises during the actual migration.

You recommend to use backup/restore method, but I did as written above, so can I encounter any problems now? Everything worked without any problem.

If everything worked fine and you were able to attach the database, then NO you wont be having any problems. Detach/Attach vs Backup/Restore is just a method on how you move your database/s to a different place. Just FYI .. Backup/Restore is more secure and reliable as if anything goes wrong (in worst cases) then atleast you have a backup to restore and recover your database/s.

About checksumming and full recovery model: it wasn't available/enabled on SQL Server 2000, so I want to use them now. You said that the only thing I need to do is to enable those options in database properties? I've read somewhere, that it isn't enough and I should also rebuild indexes or something. I really don't know, I just asking.

As I said, checksum is new in version 2005 and up. It is a mechanism by which SQL Server will detect page corruption especially due to I/O. Refer to my answer here for more details.

To enable CHECKSUM as well as change the recovery model to FULL, you can do it using below T-SQL code :

Note : Once you set the database options, it will be persisted when you do migration from 2008R2 to 2012.

Yes please. As I said, backup restore is the preferred method, unless you have a good reason not to do it.

Please explain me the backup/restore method: Is it like a dump of database to SQL queries and then restoring it by executing a bunch of queries? Will this method by the way "defragment" my database? If not, how to defragment/optimize it manually?

Backup/restore is ... similar to dump and load used in Sybase, Oracle or probably MySQL as well. Its just SQL Server calls it .. backup/restore.

A must read : Understanding SQL Server Backups by Paul Randall.

Then restore can be done on destination server as :

Will this method by the way "defragment" my database? If not, how to defragment/optimize it manually?

backup/restore will not defragment your database. You have to use Alter Index Reorganize or Rebuild depending on your fragmentation level.

Since you are new to SQL Server I would highly recommend you to use Ola Hallengren's :

As we were using SQL Server 2000 Express for years (no management interface), we were doing backups simply by stopping engine and RAR the DATA directory. For now, as we are on SQL Server 2008, isn't this still better than using backup function in Management Studio?

Stopping engine is the worse thing that you can do to do a backup !!

Read Paul's link about the backups that I mentioned and Use Ola's script. Microsoft has a KB article with the script to do automated backups - How to schedule and automate backups of SQL Server databases in SQL Server Express

Every SQL Server database has a log that records all the transactions and database modifications made by each transaction. The transaction log is a critical component of any database.

The usual naming convention extension for Transaction log is '.LDF', but it can be any.

I am not going to write more on this as this will make the answer very leanthy. Refer to Transaction Log Management and my answer here has excellent links as well.

If you are migrating your entire instance from one version to another version, I would highly recommend to use PowerShell based solution Start-SqlMigration 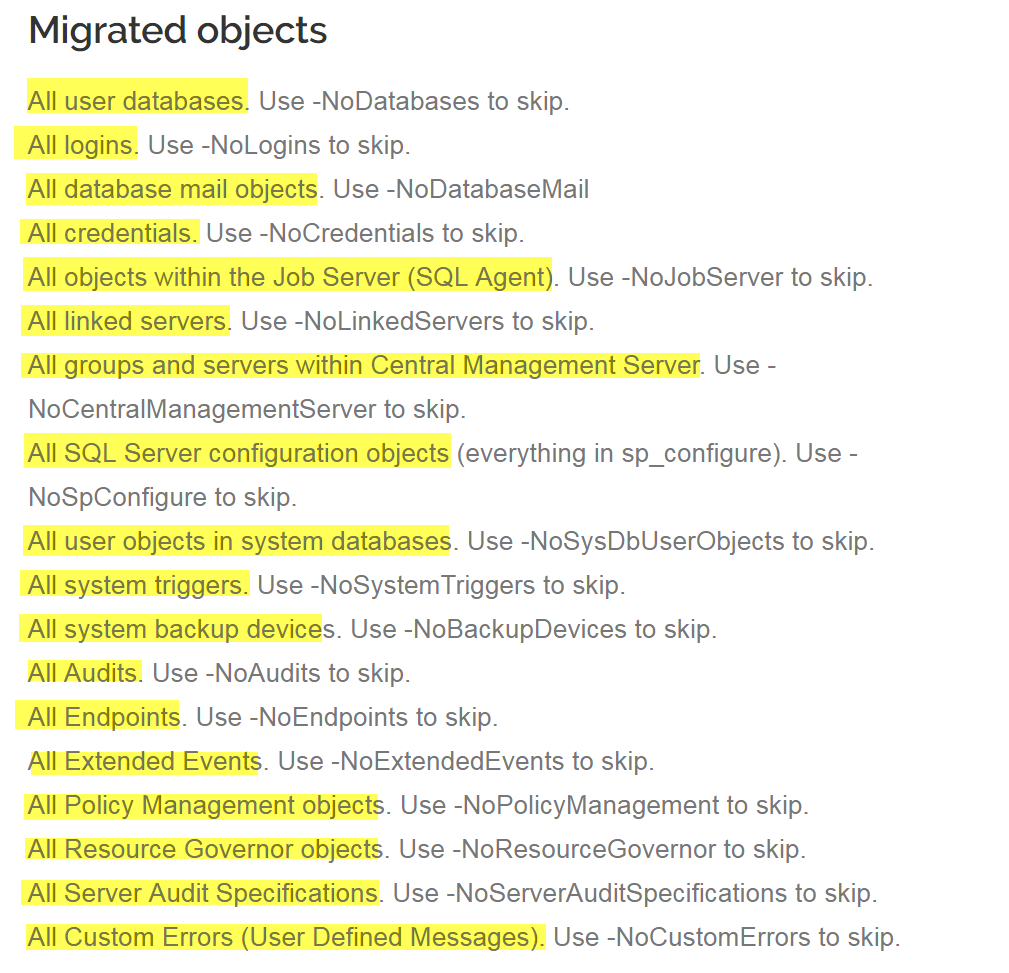 Not the answer you're looking for? Browse other questions tagged sql-server-2008-r2 sql-server-2000 migration or ask your own question.