I have the following structure of table.

I need write a query for hierarchical sorting.

In the following sample, "tree_no" is drawn for expected sorting: The same kind of sorting for all other columns also need to be sorted like parent child separate sorting. I've been trying with recursive. Any other dynamic solution ? 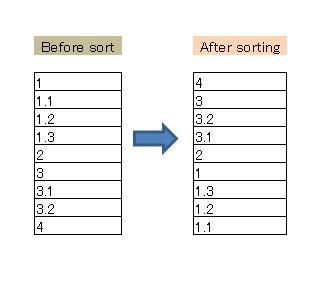 Efficiently storing, processing and reporting on hierarchical data of mixed/unknown depth in SQL is quite a complex area: whole books (such as Joe Celko's "Trees and Hierarchies in SQL for Smarties") have been written on the subject.

What you have there is often called a "naive tree" (only the parent relationship is noted) which does not allow for easily performing such a sort, or for queries where you want all data from under a particular node. It is common to de-normalise the structure in these cases by adding a path element to each row, so you can perform the sort you are looking for by sorting by theis field (and you can perform "everything under no matter how deep" queries by using filters such as tree_path LIKE '/path/to/target/node/%' (or tree_path LIKE '/path/to/target/node%' if you want to include the node itself). This avoids any need for recursion or an arbitrarily long collection joins, though of course you have the extra work to do maintaining this path when the tree changes. The book I usually recommend to all DB people (devs and admins alike), "SQL Antipatterns", has a chapter on this which covers the basics of this and other alternatives quite clearly (so you don't need to try consume Calko's tome unless you have some more complex requirements!).

If you can't alter the structure then you might be able to produce the path as an output using a recursive CTE (Common Table Expression) - I'll not go into detail here as there are already many good examples out there (in the documentation and StackExchange questions such as https://stackoverflow.com/questions/3307480/postgresql-recursive-with).

If your tree has a fixed depth (all leaf nodes are the same number of levels below root) then a fixed set of joins will do the trick:

for three levels below your root(s). If your depth is not fixed then this would not work (well, it could be forced to up to an arbitrary depth but the joins and the ordering clause would be pretty hairy to design and inefficient to run) to you need to use the CTE approach or use a modified data structure.

2
Recursive Manager - Oracle 10g x 11g
5
Count the nodes in a binary tree structure
0
Recurstive query parent child speed
0
Recursive Seller Account with Balance
0
How to select recursively in a child parent design situation (in MySQL)?
5
Recursivly get a Tree Via self joined table
2
Foreign key reference to column that is no primary key
3
Get the total count of every child foreign keys
0
How can I include an entry for an intermediate row In a recursive query summing up children