The column order of composite clustered primary key on a partitioned table?

I have the following table.

The table will be partitioned by K1 (K1 has low selective. the data will be appended in the order by K1). Which of the following primary keys (the column order is different) is preferred?

Or should the PK be non-clustered and create another clustered index?

Which of the following primary keys (the column order is different) is preferred?

Like all indexing decisions, much depends on how the table will be queried.

This affects the utility of each index for different types of queries, as one would expect. The main extra consideration is that inequality seeks on the first real key (K1 or K2) are still supported, regardless of any inequality seek and/or partition elimination operations on the PartitionID column.

For example, the (K1, K2) index specification can seek to a range of partitions, and a range of K1 values simultaneously: 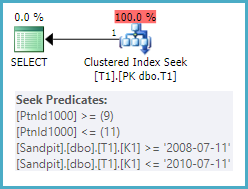 The same query on a table with (K2, K1) as the clustered index key could seek find the range of partitions, but it would have to fully scan each qualifying partition to locate rows that match the K1 predicates exactly. To be clear, the test of K1 values would be applied as a residual predicate, not as a seeking operation.

This will show as a Clustered Index Scan in showplan, with a partition-eliminating seek, and residual predicate on K1 values: 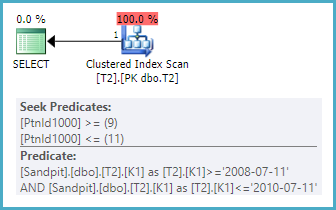 A subtle point when using the date data type as the partitioning key is that you must be careful to use explicit date types in your queries if you expect partition elimination to occur reliably. Using other types, such as datetime, is easily done (by accident) but will often prevent elimination, where it would logically be expected.

For example, this query will touch all partitions:

Whereas this query will touch only a single partition:

Both queries look superficially identical in graphical showplan (a clustered index seek). You need to check the operator properties in detail to check if static or dynamic partition elimination is being applied.

For the example join query given in the question: Both indexing strategies include the K2 column, but neither can generally provide rows in K2 order without a sort. As a result, either index is equally good for a hash or nested loops join, but neither can provide the input order required for a merge join on K2.

The proposed clustered primary key (K1, K2) has the potential advantage of minimizing base table page splits if appended data is actually sorted by the clustering key during the insert operation. For the (K1, K2) index, this would mean rows sorted by (PartitionID, K1, K2). For (K2, K1), it would be (PartitionID, K2, K1).

Since you are making your primary key clustered, if you look in this Technet article on the aligning indexes with partitions it mentions under the Clustered indexes section that if you do not include the partitioning column in the clustered index it will be done for you. Both of your options do include the partitioning column so that isn't an issue but should probably be kept in mind.

All of that being said everything nothing I've read says it makes any difference as long as the clustered index contains the partitioning column (making it aligned). Personally I would probably put the partitioned column first. In my mind that would seem to allow SQL to decide which partition to look in before looking at any other columns in the index.

Based on the information given, there is no real need to have a separate PK and CIX in this case. This of course assumes that the combination of K1, K2 is unique.

You do not have to include your partition key in your clustered index if the primary key itself is not partitioned.

You can create an identity column to serve as the primary key and the clustered value, but partition the table by another value.

That would be my preference because it will result in smaller indexes because the cluster key is smaller.

if you have identity field, PK should be on 'K1' and 'id_filed'

,but the clustered index always must be on same file group as table.

Not the answer you're looking for? Browse other questions tagged sql-server sql-server-2008 partitioning or ask your own question.