I have a persisted computed column on a table which is simply made up concatenated columns, e.g.

In this Comp is not unique, and D is the valid from date of each combination of A, B, C, therefore I use the following query to get the end date for each A, B, C (basically the next start date for the same value of Comp):

I then added an index to the computed column to assist in this query (and also others):

The query plan however surprised me. I would have thought that since I have a where clause stating that D IS NOT NULL and I am sorting by Comp, and not referencing any column outside of the index that the index on the computed column could be used to scan t1 and t2, but I saw a clustered index scan.

So I forced the use of this index to see if it yielded a better plan:

Which gave this plan

This shows that a Key lookup is being used, the details of which are: 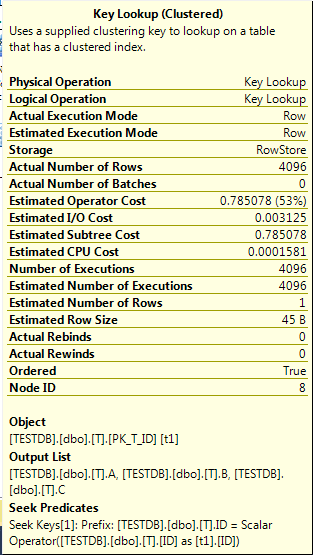 Now, according to the SQL-Server documentation:

So if, as the docs say "the Database Engine stores the computed values in the table", and the value is also being stored in my index, why is a Key Lookup required to get A, B and C when they are not referenced in the query at all? I assume they are being used to calculate Comp, but why? Also, why can the query use the index on t2, but not on t1?

Queries and DDL on SQL Fiddle

N.B. I have tagged SQL Server 2008 because this is the version that my main problem is on, but I also get the same behaviour in 2012.

Why is a Key Lookup required to get A, B and C when they are not referenced in the query at all? I assume they are being used to calculate Comp, but why?

Columns A, B, and C are referenced in the query plan - they are used by the seek on T2.

The real question is why the optimizer felt the need to retrieve A, B, and C for the index seek at all. We would expect it to read the Comp column using a nonclustered index scan, and then perform a seek on the same index (alias T2) to locate the Top 1 record.

The query optimizer expands computed column references before optimization begins, to give it a chance to assess the costs of various query plans. For some queries, expanding the definition of a computed column allows the optimizer to find more efficient plans.

It just so happens that this apply unrolling puts the logical query tree into a form that does not work well with project normalization (a later stage that looks to match general expressions to computed columns, among other things).

In your case, the way the query is written interacts with internal details of the optimizer such that the expanded expression definition is not matched back to the computed column, and you end up with a seek that references columns A, B, and C instead of the computed column, Comp. This is the root cause.

One idea to workaround this side-effect is to write the query as an apply manually:

Unfortunately, this query will not use the filtered index as we would hope either. The inequality test on column D inside the apply rejects NULLs, so the apparently redundant predicate WHERE T1.D IS NOT NULL is optimized away.

Without that explicit predicate, the filtered index matching logic decides it cannot use the filtered index. There are a number of ways to work around this second side-effect, but the easiest is probably to change the cross apply to an outer apply (mirroring the logic of the rewrite the optimizer performed earlier on the correlated subquery):

Now the optimizer does not need to use the apply rewrite itself (so the computed column matching works as expected) and the predicate is not optimized away either, so the filtered index can be used for both data access operations, and the seek uses the Comp column on both sides:

This would generally be preferred over adding A, B, and C as INCLUDEd columns in the filtered index, because it addresses the root cause of the problem, and does not require widening the index unnecessarily.

As a side note, it is not necessary to mark the computed column as PERSISTED, if you don't mind repeating its definition in a CHECK constraint:

The computed column is only required to be PERSISTED in this case if you want to use a NOT NULL constraint or to reference the Comp column directly (instead of repeating its definition) in a CHECK constraint.

Although this might be a bit of a co-incidence due to the artificial nature of your test data, being as you mentioned SQL 2012 I tried a rewrite:

This yielded a nice low-cost plan using your index and with significantly lower reads than the other options (and the same results for your test data). 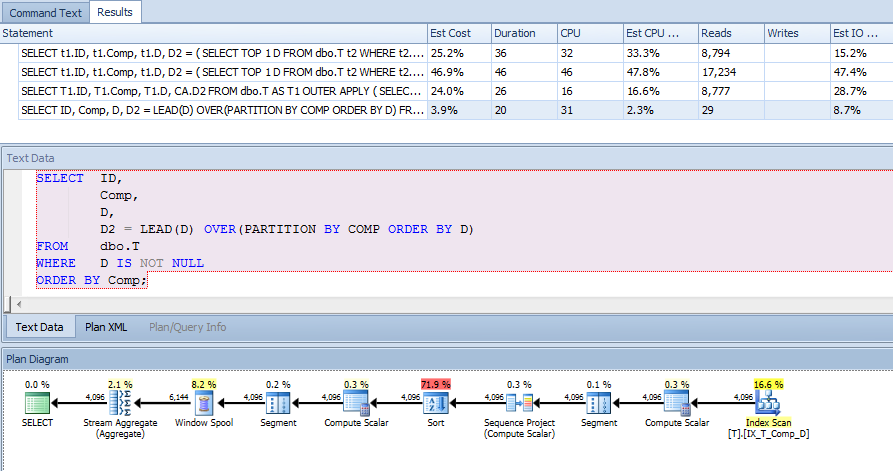 I suspect your real data is more complicated so there might be some scenarios where this query behaves semantically different to yours, but it does show sometimes the new features can make a real difference.

I did experiment with some more varied data and found some scenarios to match and some not:

When I tried to perform the same actions, a got the another results. Firstly, my execution plan for table without indexes looks as following:

As we can see from the Clustered Index Scan (t2), the predicate is used for determine the needed rows to be returned (because of condition): 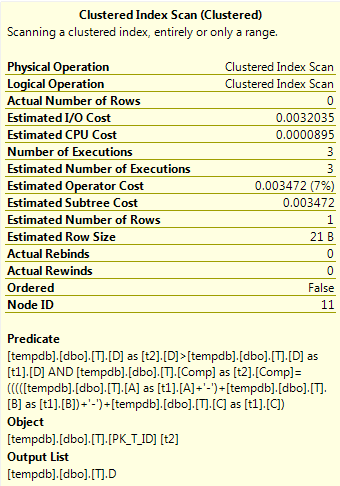 When the index was added, not a matter if it was defined by WITH operator or no, the execution plan became as following:

As we can see, the Clustered Index Scan is replaced by Index Scan. As we saw above, the SQL Server use the source columns of the computed column to perform the matching of the nested query. During the clustered index scan all this values can be acquired in the same time (no additional operations needed). When the index was added, the filtering of the necessary rows from the table (in the main select) is performing according to the index, but the values of the source columns for the computed column comp still need to be gotten (last operation Nested Loop). 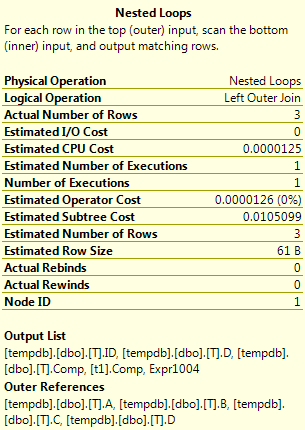 Because of this the Key Lookup operation is used - to get the data of the source columns of the computed one.