How to delete the remote files older than N days on schedule from SQL Server 2012 (with SqlServerAgent job)?

Before inserting the command into SqlServerAgent job, I tried to execute it from Windows command line:

The history of such SqlServerAgent jobs shows, quoting:

Note the green check-marks on failed job and job steps

Again, zoomed-in the text output of the result: 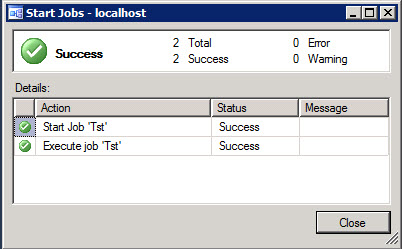 though it is persistingly failing to delete required files.

The same story with scheduling in Windows Task Scheduler - the job and steps are "succeeding" without deleting anything though copying to remote location (out of description here) by previous steps are successful. And I am interested to centralize all in SQL Server SqlServerAgent job (but not outside)

sql-server sql-server-2012 maintenance powershell
share|improve this question
edited May 23 '17 at 12:40

In order to make PowerShell errors cause a SQL Agent step to fail you have to make an adjustment to the $erroractionpreference setting. By default this value is set to Continue so the steps will show successful because no error is raised up for SQL Server Agent to detect an issue in the actual PowerShell command occurred.

You can put this at the top of your script that should fix that: $erroractionpreference="stop". This will allow the error PowerShell is returning to trickle up to SQL Server Agent process.

Forfiles doesn't work with UNC. The trick is to map the shared UNC using pushd. This maps and entered a temporarily drive. Popd will

Use a domain account for running the SQL Server Agent. Give that account rights modify rights on the network share with the files you want to delete.

I have achieved this(How to delete the remote files older than N days on schedule from SQL Server 2012 (with SqlServerAgent job).

I have been running backups of SSAS databases, and needed to delete the old backup files, on a different server.

T-SQL created by maintenance plan is

But above script doesn't work properly if executed in query window, So use Maintenance plan.......

Not the answer you're looking for? Browse other questions tagged sql-server sql-server-2012 maintenance powershell or ask your own question.