I've accidentally given a user the ownership of the db_owner schema (using the check box in the UI as below) and now I cannot:

I tried The database principal owns a schema in the database, and cannot be dropped.

And while it completed successfully, the user still has ownership, and it's greyed out so I can't seem to do it in the UI either. 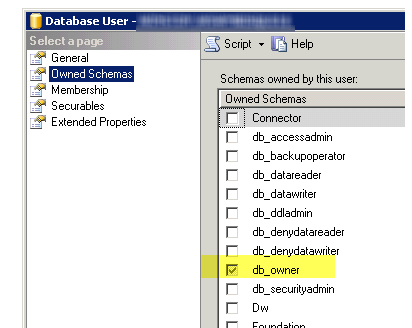 In addition to Arron's answer, I realised that I'd run the above command in wrong DB (facepalm!). Once the DB had been corrected both the above SQL and the answer below worked.

Slightly different approach would be to give the schema back to the original owner/schema, instead of to dbo:

Not the answer you're looking for? Browse other questions tagged sql-server-2012 security schema or ask your own question.

4
SQL: transfer database schema
3
Adding Security to a legacy DB with Schema
0
Granting permissions only on a set list of objects
7
Purpose of owning a schema in SQL Server
0
how do I determine why I cannot drop a schema
3
Deny dbo schema permission
4
What does GRANT CONTROL on a schema do in MSSQL?
0
Should I provide db_owner principal role to the user of the Azure SQL of my Azure Web App?
0
ALTER permission on database allows creation of security principals