We have a large (10,000+ lines) procedure that typically runs in 0.5-6.0 seconds depending on how much data it has to work with. Over the past month or so it has started taking 30+ seconds after we do a statistics update with FULLSCAN. When it slows down, a sp_recompile "fixes" the issue, until the nightly statistics job runs again.

Using DBSS SHOW_STATISTICS, I graphed out the index histogram in excel. I would normally expect the graph to be more "rolling hills", but instead, it looks like a mountain, the highest point being 2x-3x higher than most other values on the graph. 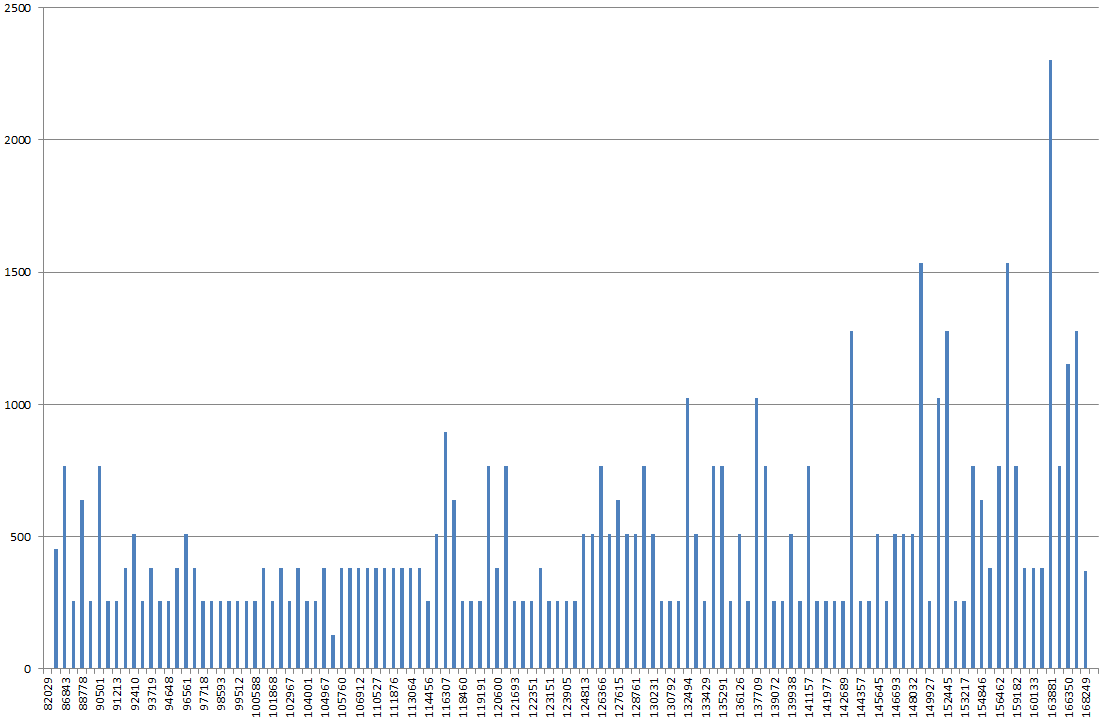 If I update statistics on it, without FULLSCAN, it looks more normal. If I then run it with FULLSCAN again it looks like I described above.

This feels like a parameter sniffing issue, and specifically related to the (seemingly) weird index distribution above.

EDIT: The proc also takes 12 other parameters, some of which are optional, two of which are a start and end date.

Is the histogram odd, or am I barking up the wrong tree?

I am certainly comfortable trying to adjust the query and/or try to adjust my indexing. If that is the fix that is great, at that point my question is more about the skewed histogram.

I should mention that this is a PK IDENTITY clustered index. We have two systems that talk to each other, one a legacy system, one a new home-grown system. Both systems store similar data. To keep them in sync the PK on this table in the new system is incremented when things are added to the old system, even if the data doesn't come over (a RESEED is done). So there could be some gaps in the numbering in this column. Records are rarely, if ever, deleted.

Any thoughts would be greatly appreciated. I am more than happy to gather/include more info.

This ended up being related to parameter sniffing. It just so happened that some oddly formed versions of this query were being executed RIGHT AFTER the stats were rebuilt. So the cached plan was not representative of the majority of the calls. I used the trick of copying the date parameters to local variables and this is working just fine, with little to no impact on performance. This doesn't answer why the histogram looks so "off", but it does explain my performance issues.

Not the answer you're looking for? Browse other questions tagged sql-server sql-server-2008-r2 index-tuning index-statistics parameter or ask your own question.

2
Estimated vs Actual Number of Rows

3
Query Performance Issue
12
statistics are up to date, but estimate is incorrect
2
MSSQL 2014 “The provided statistics stream is corrupt” Error 9105
8
Bizarre density results in sampled statistics
6
Performance issue with sp_executesql and VARCHAR parameter
1
Should you OPTIMIZE FOR default values in a dynamic search query?
20
Advice on diagnosing a “sometimes” slow query
0
Plan changes to include Eager Spool causes the query to run slower
1
Parameter Sniffing - Running query in code vs in management studio