Why does importing a MySQL dump cause so many I/O?

I used the default options of MySQL Workbench to create the SQL-format dump files, namely: 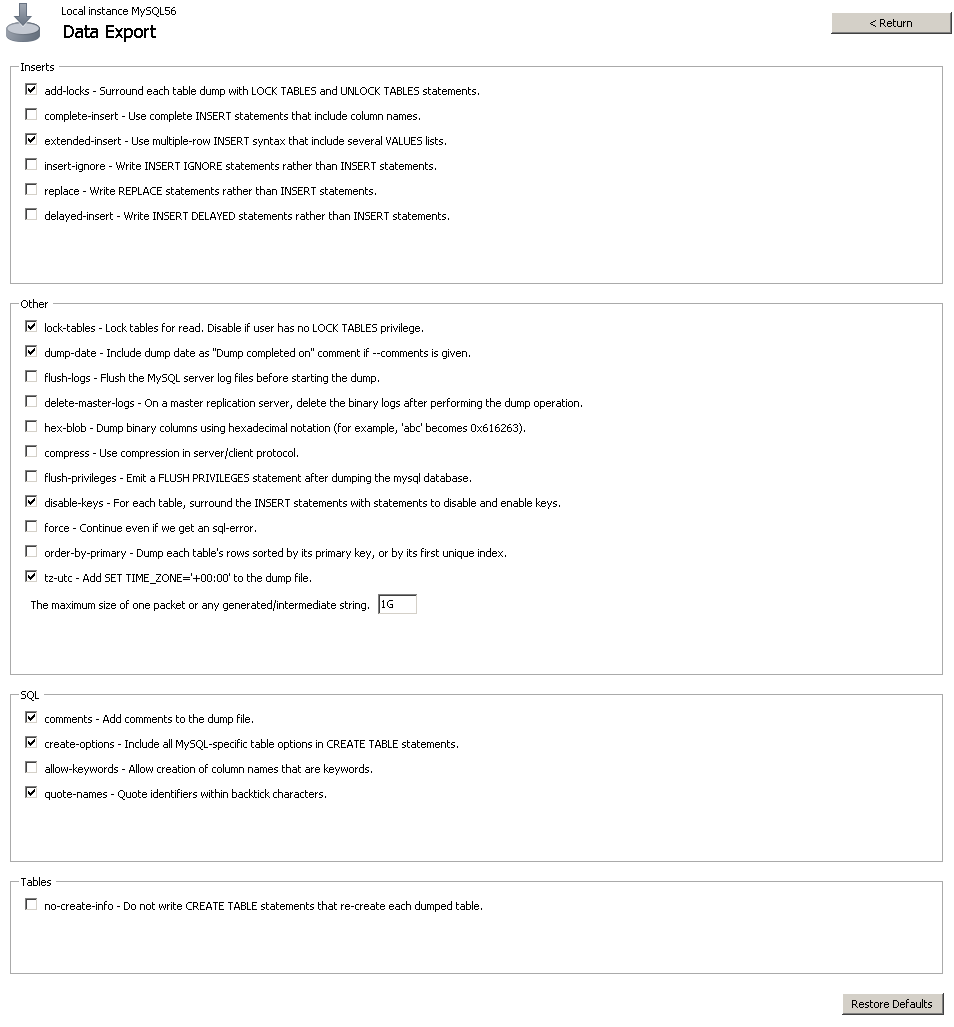 It seems to match pretty well the advice of the section Bulk Data Loading for InnoDB Tables of the MySQL Reference Manual (except for autocommit=0, which is not present in my dumps). The resulting code headers in the dump look like:

I know I could try using other dump tools to speed up, but I'm curious. I'm especially impressed by the number of writes.

Restoring a dump file, fundamentally, involves inserting all of the rows and building all of the indexes for all of the data. In that light, it's not particularly relevant how the dump file is generated, whether you use one or several files, or which of the available options you select (though some of them, like extended-insert could possibly make it worse of not selected).

When you're restoring a file, you're also:

Setting innodb_flush_log_at_trx_commit to the slightly less safe value of 2 or significantly less safe value of 0 from the very expensive but ACID-compliant default value of 1 will speed up your insert for sure, though it isn't likely to reduce actual I/O because that value doesn't change what's written to the transaction log, it merely changes how often InnoDB insists on confirmation from the operating system that the contents of the log have been persisted to disk. I use "safe" in the sense of safety against the loss of recent transactions if a crash occurs during the time the value is set to 2 or 0; 1 protects against data loss if either MySQL or the system crashes; 2 protects against data loss if MySQL crashes but not the system, and 0 protects against neither. Once you set it back, it doesn't have any after-effects.

Quick side note, some of the comment-looking things shown are not comments. The /*!mnnrr format is a MySQL backwards-compatibility extension that tells the server "If you're MySQL version m.nn.rr or higher, execute this statement, otherwise disregard."

Each table is surrounded by these in a dump file. These were more useful with MyISAM than with InnoDB, because DISABLE KEYS directed the storage engine not to update any non-unique indexes until ENABLE KEYS was issued, allowing all of the row data to be written, and then indexed in a batch. With InnoDB, the indexes are built as the inserts are processed... so there's a lot of I/O potential there as the index trees are being built and shuffled around.

The size of the InnoDB buffer pool is going to play a role in the amount of disk I/O -- possibly a significant one if it's relatively small -- because whatever can't stick around in memory will have to be promptly flushed to disk, only to be read back in when it's needed again, and this will be particularly true with indexes, less so with the actual rows, because in InnoDB, rows are physically stored in primary key order, and mysqldump writes them to the file in primary key order... so they're inserted in the order in which they'll be stored... but the secondary indexes will have to be shuttled back and forth to disk as index pages are updated as the insert operations on a given table progresses.

So there's a baseline of "extra" activity that every insert that happens, because of all the different logging, safety, and ACID mechanisms... and indexes seem like a likely wildcard candidate for potentially creating a substantial amount of additional I/O.

Not the answer you're looking for? Browse other questions tagged mysql mysqldump import dump or ask your own question.

197
How can I optimize a mysqldump of a large database?