Does SentryOne Plan Explorer count the reads in UDFs?

In SQL Sentry Plan Explorer, I noticed I have to run Get Estimated Plan to make the Query Plan include the UDF.

When running 'Get Actual Plan', it doesn't appear that the logical reads and other metrics include the operations that occur in the UDF. In cases like this, is the only workaround to use Profiler?

The biggest problems we have here are:

What Management Studio Does (and Does Not) Tell You

Take the following query in SSMS:

When you estimate a plan, you get a plan for the query and a single plan for the function (not 5, as you might hope): 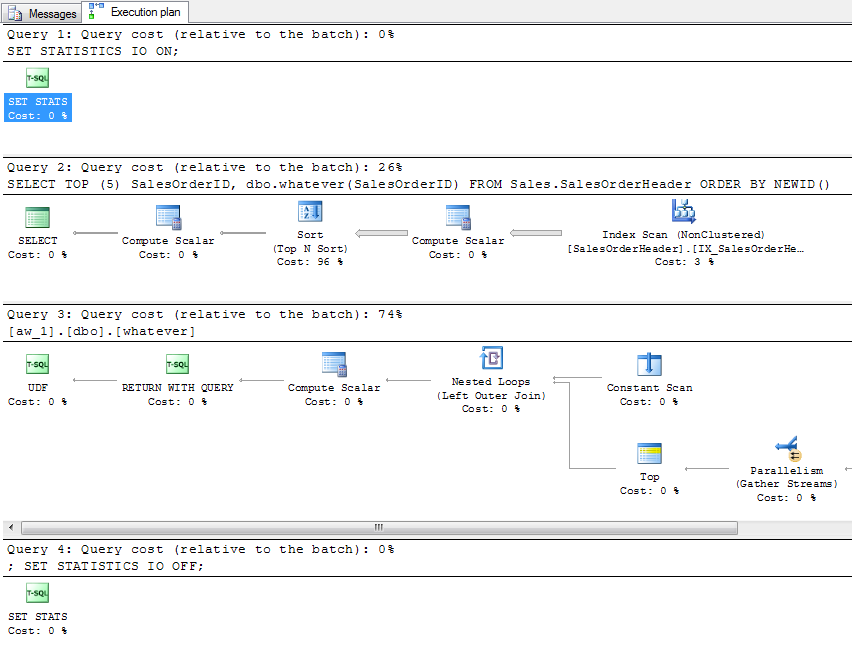 You don't get any I/O data at all, obviously, since the query wasn't actually executed. Now, generate an actual plan. You get the 5 rows you expected in the results grid, the following plan (which makes absolutely no visible mention of the UDF, except in the XML you can find it as part of the query text and as part of the Scalar Operator):

And the following STATISTICS IO output (which makes absolutely no mention of Sales.SalesOrderDetail, even though we know it had to read from that table):

What Plan Explorer Tells You

When PE generates an estimated plan for the same query, it knows about the same thing as SSMS. However it does show things in a slightly more intuitive way. For example, the estimated plan for the outer query shows how the output of the function is combined with the output of the query, and it is immediately clear - within a single plan diagram - that there is I/O from both tables:

It also shows the function's plan by itself, which I'm only including for completeness:

Now, let's take a look at an actual plan, which is thousands of times more useful. The downside here is, again, it only has the information that SQL Server decides to show, so it can only expose the graphical plan diagram(s) that SQL Server provides. This isn't a situation where someone decided not to show you something useful; it just doesn't know anything about it based on the plan XML that is provided. In this case, it is just like in SSMS, you can only see the outer query's plan, and it's as if the function isn't being called at all:

The Table I/O tab, too, still relies on the output of STATISTICS IO, which also ignores any of the activity performed in the function call:

However, PE gets the entire call stack for you. I have occasionally heard people ask, "Pffft, when will I ever need the call stack?" Well, you can actually break down the time spent, CPU used, and number of reads (and, for TVFs, number of rows produced) for every single function call:

Unfortunately, you don't have the ability to correlate that back to which table(s) the I/O is coming from (again, because SQL Server doesn't provide that information), and it isn't labeled with the UDF name (because it's captured as an ad hoc statement, not the function call itself). But what it does allow you to see, that Management Studio doesn't, is what a dog your UDF is being. You still have to join some dots, but there are fewer dots and they're closer together.

Finally, I would strongly recommend staying away from Profiler, unless it is to set up a server-side trace that you are going to script and then run outside the scope of any UI tool. Using Profiler against a production system is almost certainly going to cause more problems than it will ever solve. If you want to get this information, please use a server-side trace or extended events, and be sure to filter very wisely. Even without profiler, a trace can impact your server, and retrieving showplans through extended events is not the most efficient thing in the world either.

Not the answer you're looking for? Browse other questions tagged sql-server sql-server-2008 query-performance execution-plan functions or ask your own question.

14
Does SentryOne Plan Explorer work?
11
Estimated versus actual query plan with function calls
4
Why does SqlSentry Plan Explorer not give the duration of my queries?
4
Every query plan statistic says my query should be faster, but it is not
2
Is there a way to get the Actual Execution Plan for a cancelled query?
16
Difference between Seek Predicate and Predicate
0
SQL extended event captured only the estimated execution plan but no actual execution plan
2
Highest cost section in Actual Execution Plan doesn't show any logical reads?
2
Slow query SQL Server
2
Need help tuning a complicated query