What would cause the speed difference between servers?

I have this query on my dev server:

This used to work ok on the dev server until yesterday. Now it's taking about 1 1/2 minutes to run. However, it works fine on the test server.

Here's the weird part. If i modified the query on dev to take out one of the left outer joins (either one), it would run fine (but the wrong dataset). If i added the join back it slowed down again.

Also, the data between the servers are within 90% similarity. Structure and amount wise.

I also tried rebooting the dev server, but that didn't fix the issue.

So, what could cause this discrepancy? Where should I be looking?

edit- ok, so i missed something in the execution plans. The test server (the one that works) is on the left, the dev server on the right. 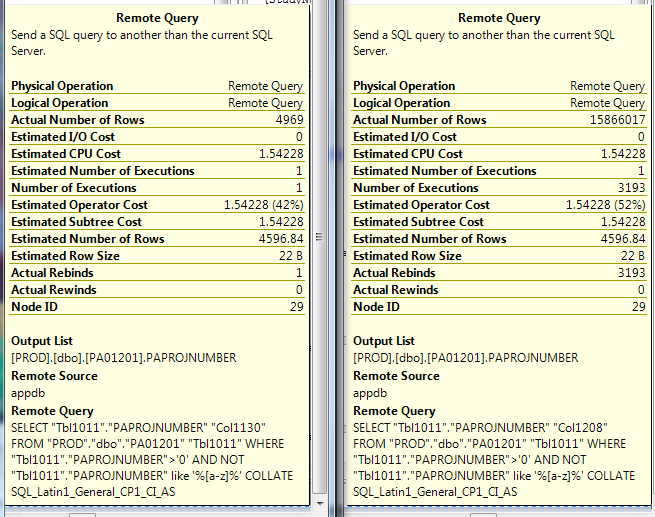 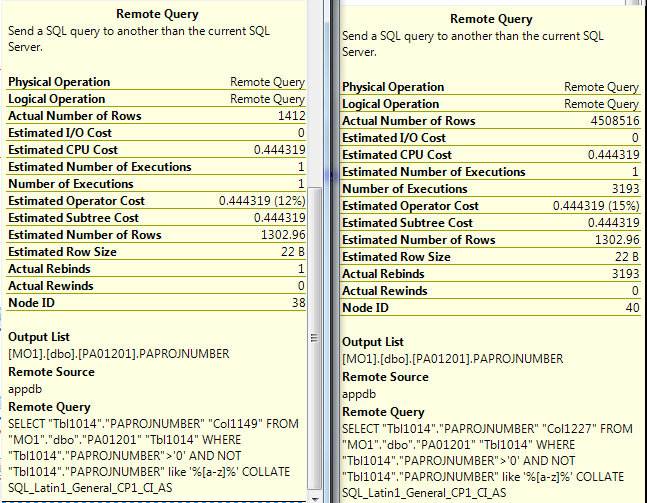 Sounds like your statistics are out of date. Run UPDATE STATISTICS on the tables on the server running slow and see if that fixes the problem.

Not the answer you're looking for? Browse other questions tagged sql-server sql-server-2008 t-sql or ask your own question.

4
What options exist for copying data between servers on a regular basis?
3
Execution plan flips Filter and Execute Scalar when using the PK, causes cast to fail
3
SHOWPLAN does not display a warning but “Include Execution Plan” does for the same query
2
LEFT OUTER JOIN versus WHERE IS NULL
0
changing from inner joins to left joins to include null values?
2
Why does elimination of an if-statement cause notable speed up in my function?
5
why is this left join faster than an inner join?
12
Inner join elimination inhibited by prior outer join
12
Why Does the SQL Server Query Optimizer Not Convert an OUTER JOIN to an INNER JOIN When a Trusted Foreign Key Is Present?