I have to achieve 3NF with following specifications: Database where I will determine priority skills for specific jobs and track the employees ability to complete them. Train employees.

ID in catalog of skills is generated according to model:

For job position skill and employee, there are 3 levels: -familiar -intermmediate -excellent

I wrote detailed info above so you get the concept idea.

This is done in Oracle. I have .csv file with rows and data which I'll import but they're not in 3NF. Now my attempt to apply this to tables/ER model:

I already have DEPARTMENT table pre-generated, so thats done. I thought about creating 3 tables to achieve model:

Primary key will be marked inside [], and foreign with ()

Now, this is what I got as suggestion on my first model. And another, that I put the rest as materialized views. But somehow I don't know if this is the right way to do it.

In short, I'll have to track employees on certain job positions with certain skills(if they are sufficient or not).

I get kind of blurry on realization.

I'd really appreciate some direction here, thank you.

You'll probably end up with something looking a little like this: 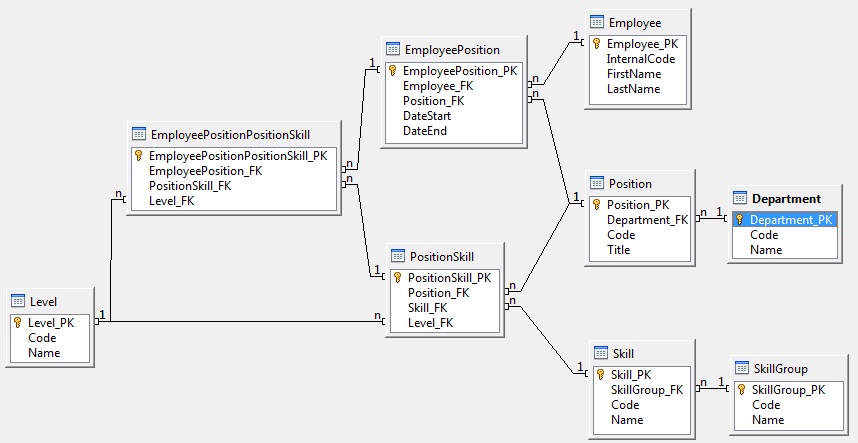 This may be a little more involved than you first expected, but I'll take you through the whys and hows of it all ( doing this is generally much easier than explaining it, by the way ), starting with identifying objects. Using "Noun-Verb" analysis, which is a fairly common OOAD technique, we start picking apart your requirements:

Right away, it becomes evident that at least Employee, Position / Job and Skill are needed. Further along, a need for Department and Skill Group emerges, then finally Skill Level. From here, things like Employee Surname are noted as well.

Some liberties are then taken here ( which is not abnormal in any way, considering the quality of the list of requirements you'd normally be extracting from a client ), but the noun list to be used for the general structure, in no particular order, is as follows:

Using these nouns, on a relatively simple level, relationships between them can be established using "is-a / has-a," that is, "Noun A is a Noun B" or "Noun A has a Noun B." This is particularly useful for classifying our nouns into two categories, being an "attribute", an atomic entity, later called a column, or a "container," which is a collection, later called a table. During the first round of this "is-a / has-a," the goal is generally to simplify the list, effectively removing the attributes from the picture, grouping them to their containers.

With this reduction, the one-to-many relationships can now be considered. A Department ( D ) may have any ( a pluralized has a ) number of Positions ( P ) available, implicitly indicating a one-to-many relationship. Extending the above notation, in addition to the attribute list, we can now add "compound" attributes. More simply, a compound attribute is basically a container treated as an attribute. This can be written as ( P: PC, PT, ( D: DC, DN ) ), which begins to highlight the places where foreign keys will materialize. Similarly, Skill Group ( G ) may refer to a number of differing Skills ( S ).

A quick note: The { Un } is used to indicate both attributes ( themselves containers ) are part of a single unique key. If the attributes were independently unique, we could use { U1 } and { U2 }.

The final piece comes in the form of the relationship between an Employee's ( E ) specific term of employment, Employee Position ( EP ), the relevant Position Skills ( PS ) and the quality at which those specific Position Skills ( PS ) are realized, or simply, the achieved Level ( L ). Much like the relationship established between Position ( P ) and Skill ( S ), there is a Employee Position Position Skill ( EPPS ) which has a compound attribute of Level ( L ) in a many-to-one relationship. This again requires a unique key, leaving our noun list ( now expanded ) in the following state:

That, of course, is a bit on the crazy side to read, so we extract the definitions we've reduced the problem to in an actionable way. Here, I've added additional unique keys simply for the purpose of completeness. Note that there are no soon-to-be tables which contain more than one independently unique key, so { U1 } is used throughout, per table:

Not the answer you're looking for? Browse other questions tagged oracle database-design or ask your own question.

12
What is Key Preserved Table concept?
1
Oracle RAC concept
0
Concept of Cardinalilty in Oracle
1
Database Designer's Block
0
Data modeling for employee has multiple managers
0
Database design - model a 'Company' with 'Owner', 'Partner', 'Employee'
0
Can someone give me feedback on my ER diagram?