Move Complete ORACLE from one system to another 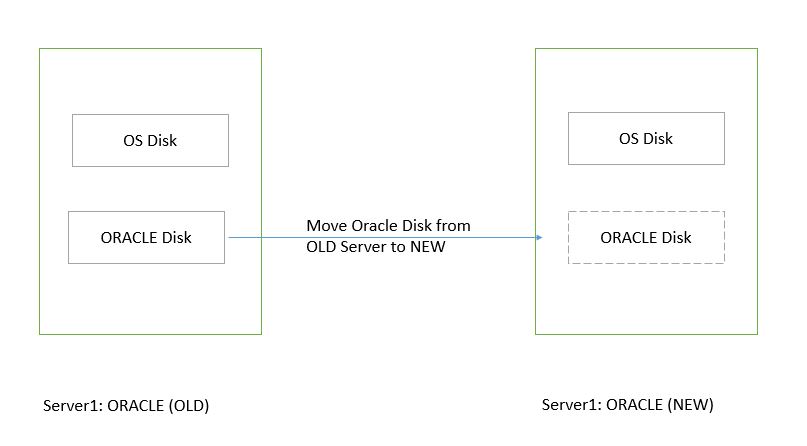 I have 2 identical server with exact disk partitions (OS CENTOS 6.4 both ) [My college central oracle server].

Entire ORACLE HOME ( bin , control files, data files everything on oracle) is on 2nd Disk (which is not a OS disk)

Since OLD server had reached end of life (from HP) a new HP machine with upgraded RAM (OLD system had 16 GIG where as new system as 64 GIG).

Now Since All oracle Dependencies (RPM, libraries, environmental variables, JAVA, Users and groups) are already made on new server.

So Now Question is ..

Can I remove Disk [Oracle HDD] from OLD server and insert it on NEW server and just start Oracle (sqlplus "/ as sysdba" or dbstart and lnsctrl).

Can it will give any challenge. (I have cold backups, export backup, & RMAN backup too).

I just want to give a try on above case.

And that's it, you are good to go.

Maybe it will work if you have adapted all configuration information outside your oracle disk. I did it often on Sparc Solaris machines and it worked. This is more a Linux/Unix question: When can I copy my software installation to a different server and must not install it. I did not know. So I think the better way is to relink the Oracle binaries after you plugged in the disk into the new server. This is described in the Oracle Database Administrator's Reference11g Release 2 (11.2) for Linux and UNIX-Based Operating Systems. Oracle suggested to relink the binaries whenever the operating system is patched or upgraded. Your new server is not 100% the same as your old server so relinking makes sense. Simply set your Oracle environment in a terminal window of the new server and type relink. If you fall back to the old server do the same on the old server.

You can even copy oracle software to a new server and adapt it to the new environment (new hostname, new pathes and so on). This process is called 'cloning'. You can use a perl script. This is decribed in the Oracle Database Installation Guide 11g Release 2 (11.2) for Linux or you can use the Oracle Installer as described in the Oracle Universal Installer and OPatch User's Guide11g Release 2 (11.2) for Windows and UNIX.

You can duplicate your database with RMAN

Not the answer you're looking for? Browse other questions tagged oracle linux or ask your own question.

2
Arabic characters not displaying in oracle database
2
How to set Password for sqlplus /as sysdba
0
ORACLE Shifting from from one version to another
1
RMAN rename datafile created in an archivelog
2
Restoring a tablespace to a different database
1
Restoring RMAN backup in Oracle 9i to another server
1
clean flash recovery area archive logs
3
How do I restore an Oracle file system backup onto a new developer machine?