I've noticed an odd behavior on a 2-server HA cluster and I was hoping someone could confirm my suspicion, or maybe offer some other explanation... Here is my setup:

Overall, no resource issues are noted. Now for the odd part. SQL is not restarted (process has been running for almost 6 months) but it seems that every ~50 days, the Page Life Expectancy counter drops to (almost) 0. Up until that point it climbs steadily, no drops. Here is a perf graph: 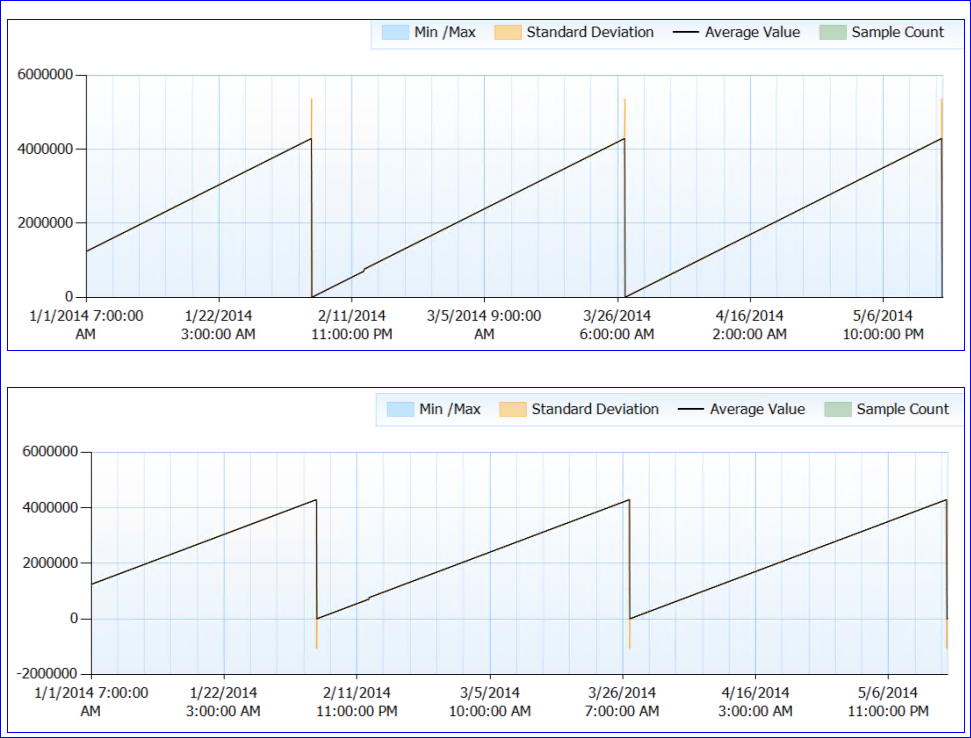 When I look at the counter data (I don't have the exact number, just an hourly aggregation) it seems the PLE counter value reached about 4,295,000 sec (roughly 50 days) every time (at least every time I have data for).

My crazy theory is that the PLE number is held as milliseconds as an unsigned long int (which has a limit of 4,294,967,295) and at 49.71 days it resets, either by design, or because of a bug. This would explain the behavior of the two servers and the identical pattern they have. Or it could be something totally different and I am just not making any sense. :)

Has anyone seen anything like that, or can explain this behavior?

P.S. I saw this post, but my case seems slightly different.

P.P.S. This is a repost - I originally posted it here, but was advised the audience here is more appropriate.

I've seen this behaviour on a client site running SQL2012 SP1. The specifics here were NUMA, and PLE demonstrating a 'sawtooth' pattern but on an hourly cycle.

A couple of threads on SQLServerCentral discussed around this:

the end result being that applying SP1 CU4 seemed to fix the problem.

Not the answer you're looking for? Browse other questions tagged sql-server sql-server-2012 page-life-expectancy or ask your own question.