I recognize that there are a ton of posts like this, but after reading up on InnoDB performance problems, nothing I tried has helped.

I have a database containing four InnoDB tables. The largest table currently holds 700m rows. I'm running a java application that is consistently inserting into/updating the database through a single connection.

Initially query performance was ok, but I had noticed that occasionally it would become unbearably slow. As was pointed out to me in the answer to this question, the problem lies with the caching of the tables, and can be fixed by manually loading the .idb files into the server cache. However, not only does this feel wrong, but in addition to that it didn't work when I extended my MySQL server like so: I cloned the structure of the initial database 9 times, so that I would have ten tables with identical structure (but different data). Then I run my java application ten times, so that I have one connection per database, each consistently inserting or updating.

Since implementing the one database -> ten databases change, the manual loading of .idb files only fixes the slow query problem for a very short time, and queries occasionally take much much longer (peaks of several seconds, averages of 200ms for a 80 row insert where ~70 already exist and get ignored, and the other 10 trigger 3 updates each). That is even with using a collective amount of about 2% of the data accross the ten databases compared to the single database I used before, and the ten java applications collectively sending as many queries as the single application did before (in reality it's even less, because the queries take so long). The server itself also responds much slower when executing the program for ten databases.

The server has 24G ram and 4 cpu cores. If the queries are super slow, cpu usage goes down to single digit percent.

A typical cycle of queries from my application looks like this:

Where about 15% of the table1 and table2 rows, 50-90% of the table3 and below 1% of the table4 rows actually get inserted and the rest is ignored because it already exists.

Edit: To show the unreliability of the queries, I have attached this figure, which displays the number of query cycles per 5min interval, since program start.

This is on the ten databases server, I have disabled 8 of the 10 connections and this is one of the remaining two: 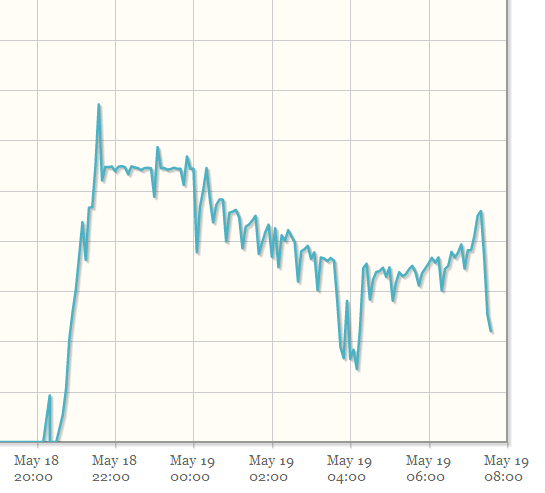 This is the last 24h on the single database server (that one only has an innodb_buffer_pool_size of 6GB, maybe that's why it's more volatile?): 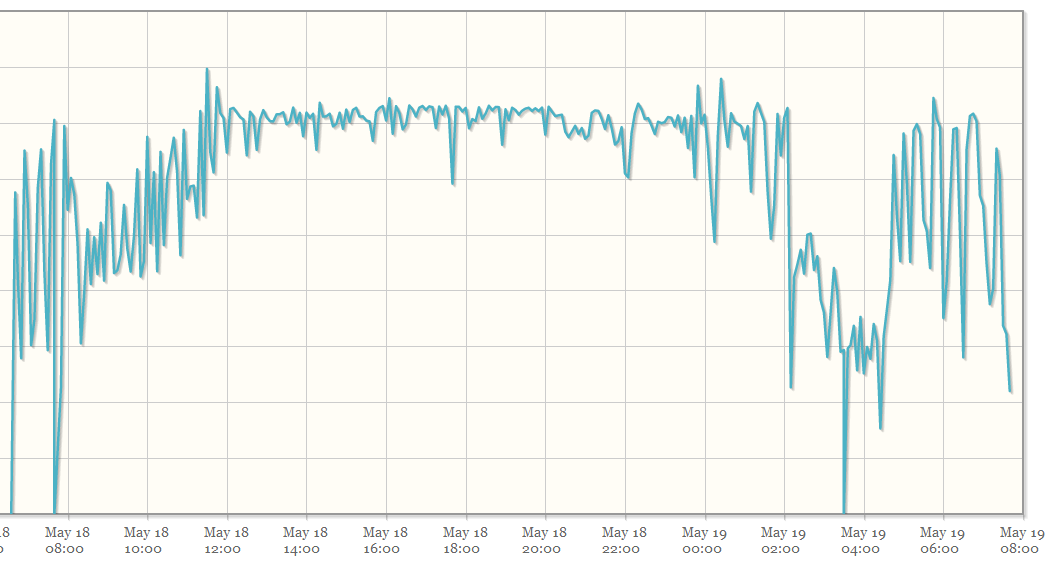 is bad for dml statement, #MyISAM is better. Innodb is try to commit all INSERTing data to disk and returns success after it pined.

when you need a big insert data you can avoid auto-commit=0 to get faster. or you can check this for hint.

Your tables do have several indexes to update, did you remember to run a optimize table from time to time?

This will optimize all tables and indexes in the Database MyDatabaseName.

Depending on how your data looks this might help with INSERT and SELECT speed. I guess since you have tried everything you have been going through all of the system optimization. If there is really only one process updating the databases, there might be no greater benefit in using InnoDB and MyISAM might do better.
Usually when statements are slow on a MySQL server it is possible to find the bottleneck, the one spot that is your currently most limiting factor. Sometimes these show up in unsuspecting spots like, the linux IO scheduler (deadline or noop are the only sensible options for a DB server, based upon what drives and controllers are used), the query cache can slow execution down a lot since sometimes management of the cache by far outweighs its usefulness (flush frequently or disable), nameresolution enabled and DNS server slow... just to name some popular ones.
My personal check list:

RAM (enough free/cache RAM availabele, sensible use of RAM by MySQL (mysql-tuning.sh) ) SWAP should only contain "unused data and programs", no active transfer to or from swap should ever occur during normal operations!

IOload / IOwait if this has a noticable high value your storage system or network are the most likely culprits (DB volume on a RAID 5 or RAID 6 volume, lame NAS, stupid SAN setup, etc)

Number of queries, Number of connections, new connections per sec,... anything related to SQL code executed (locking, transaction isolation) or configuration of MySQL.

High amount of new connections per minute con be a real problem due to running out of TCP sockets...

Not the answer you're looking for? Browse other questions tagged mysql innodb performance performance-tuning query-performance or ask your own question.

11
Unexplained InnoDB timeouts
1
Optimizing a query so MySQL will use the indexes for the joins
36
Why are simple SELECTs on InnoDB 100x slower than on MyISAM?
1
Subquery or multiple left joins, or both?
4
Simple query is slow on 4M-rows table
6
Optimizing a simple query on a large table
2
MySQL query taking too long
1
Slow queries on indexed columns (large datasets)