High I/O for part of query

I have a large query that I'm trying to tune. I write lots of queries but haven't done a lot of tuning. I've included a screenshot from SQL Sentry Plan Explorer Free (SSPEF): 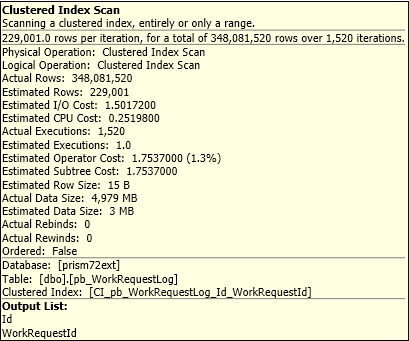 There is no where clause so the query is using a Clustered Index Scan. I've rebuild all indexes with FULLSCAN and updated all statistics.

The code that this part of the plan is executing is:

SSPEF is reporting the Actual Data Size is nearly 5GB, with 3 million Logical Reads! SSMS reports the table to be only 16 MB in size.

I've tuned the query down from 4m28s to 1m35s, but now I'm stuck. I'd be grateful if anyone could point me in the right direction to deal with this.

Edit: Someone suggested trying "OPTION (HASH JOIN, MERGE JOIN)". This made a dramatic difference. I/O was massively reduced and the query ran in 13 seconds.

Does anyone see any issues with this solution?

If you don't already have one, create a composite nonclustered index on prism72ext.dbo.pb_WorkRequestLog(WorkRequestId, Id DESC) and run the query without the index hint.

using INDEX(0) hint forces the clustered index scan. If you want to avoid it, you have to remove the hint. TABLE HINTS:

You could try also to create a nonclustered index on WorkRequestId and include the CreatedDate and Notes columns using INCLUDE clause - bear in mind this can have negative effect on the insert performance and the size of the table.

For what is worth, hardcoding database name in queries makes the code extremely hard to move to testing environments, unless you can afford single database per server instance.

Not the answer you're looking for? Browse other questions tagged sql-server-2005 performance execution-plan performance-tuning query-performance or ask your own question.