For the following schema and example data

An application is processing the rows from this table in clustered index order in 1,000 row chunks.

The first 1,000 rows are retrieved from the following query.

The final row of that set is below

Is there any way to write a query that just seeks into that composite index key and then follows it along to retrieve the next chunk of 1000 rows?

The lowest number of reads I've managed to get so far is 1020 but the query seems far too convoluted. Is there a simpler way of equal or better efficiency? Perhaps one that manages to do it all in one range seek?

FWIW: If the column A is made NOT NULL and a sentinel value of -1 is used instead the equivalent execution plan certainly looks simpler

But the single seek operator in the plan still performs two seeks rather than collapsing it into a single contiguous range and the logical reads are much the same so I'm suspecting that maybe this is pretty much as good as it will get?

Is there any way to write a query that just seeks into that composite index key and then follows it along to retrieve the next chunk of 1000 rows?

A favourite solution of mine is to use an API cursor:

The overall strategy is a single scan that remembers its position between calls. Using an API cursor means we can return a block of rows rather than one at a time as would be the case with a T-SQL cursor: 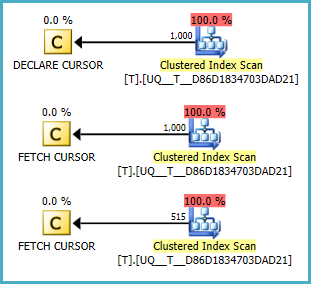 The STATISTICS IO output is:

Not the answer you're looking for? Browse other questions tagged sql-server index or ask your own question.

8
Storage order vs Result order
2
Finding exact row in Clustered index leaf page
1
Should I add a clustered Index on a foreign key that is not unique?
5
Clustered Index Scan when using greater than in WHERE clause
5
Why does a WHERE clause with an indexed, computed datetime column on an indexed view seek the clustered index on the original table
0
Slow queries on indexed columns (large datasets)
6
SQL Server chooses Nested Loop join with dimensional table and make seek for each row