Many one-to-many relationships between two tables

In the process of creating a small database for a therapeutic boarding school with Access 2013, I have a problem when designing the relational database model.

Two times at least, I ran into a situation where there were many one-to-many relationships between two tables.

So it appears to me that the idea of setting many one-to-many relationships between these tables is somewhat logical, but on the other hand:

Could you give me some piece of advice? Thanks in advance.

Edit 2014-06-26 I followed your pieces of advice and updated the schema as follows: 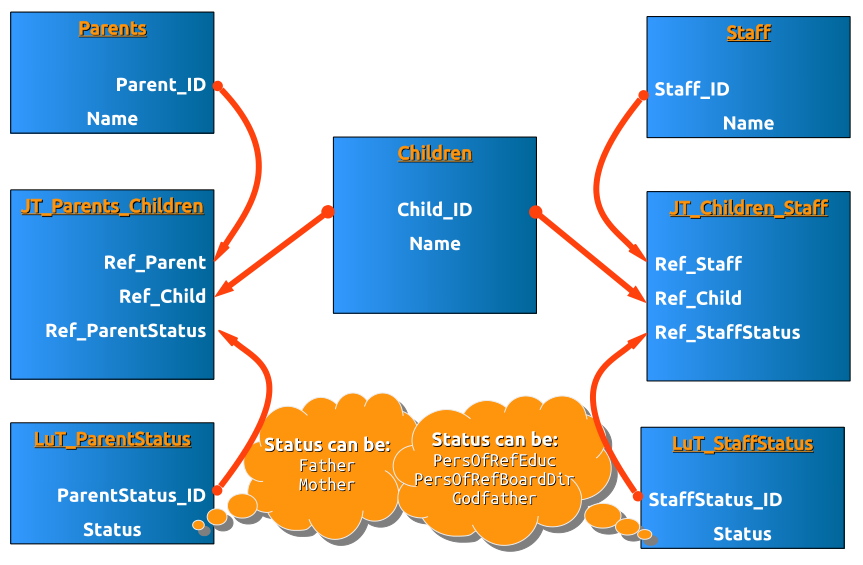 As you can see, I added join tables, and lookup tables for the consistency of status.

It surely makes more sense and is less limited for the case we would want to add some features in the future.

But in the other hand, is it compatible with the fact that for now, there are a finite number of status (father/mother, ref_educ/ref_dir/ref_godf) that are meant to be individually hardcoded in our "Cartotheque" form?

To make things clearer, I draw a mock-up preview of how it should look: 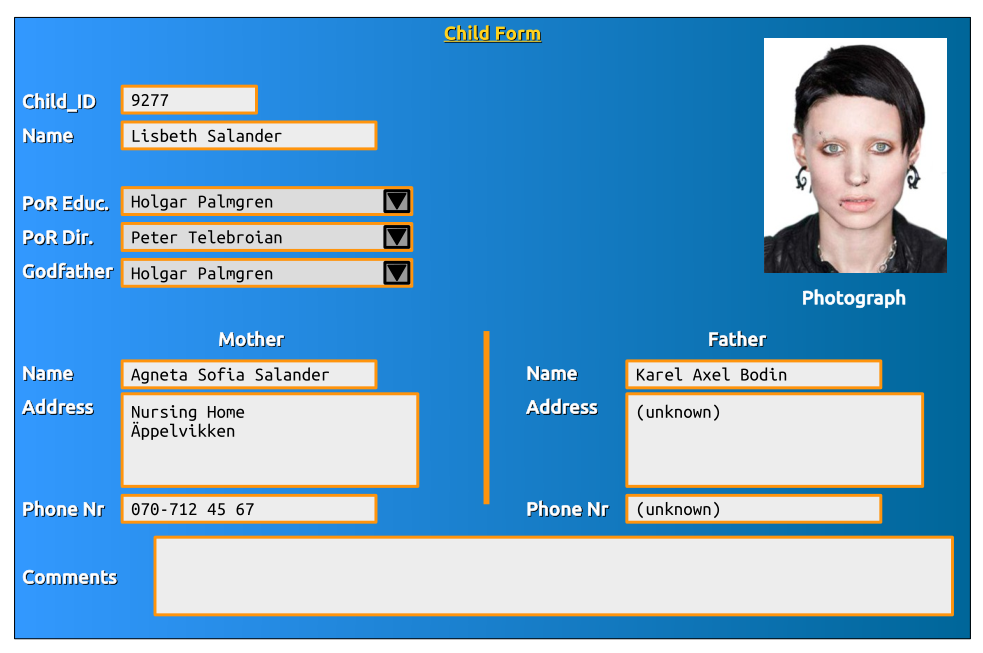 It is a one to many from the "Children" table; one child to many staff, one child to one or more "ResponsibleAdults" (who could be any familial relationship). If you change Father & Mother fields to be Responsible1, Responsible2 and add Responsible1Relationship, Responsible2Relationship to "Children", you'll solve that problem. Alternatively, you can create a join or link table using just childID, ResponsibleID and relationship (1 or more records per child ID). You'll want a "FamRelationship" lookup table for consistency in your data entry (might be parent, aunt, grandparent, guardian, etc". This way Child Joe can have Parents Mike and Mary, while his cousin child Jane can have Uncle Mike and Aunt Mary. Both Children records would reference the same 2 what you're currently calling "Parents" records.

If a "staff" member is not a member of Board of Directors and it's important to note that, add a tinyint indicator to "staff" (true/false, 1/0).

I would definitely advise using intersection and lookup tables on the staff side.

On the parent side it is more of a judgement call. Still, I'd use the intersections. Although you only have two parents you loose almost nothing by using the intersetion table (a little complexity) and gain flexibility. You should be able to hard-code the ParentStatus into whatever populates the 'mother' and 'father' fields (not an Access guru, sorry) of the example form, thereby maintianing the specificity of the original schema. You will be able to code other screens to allow for the muliplicity of blended families, for example. If it's important that each child has at most one "mother" and one "father" you can put a UNIQUE constraint on IT_Parents_Children.Ref_Child and .Ref_ParentStatus.

This would be easier:

Not the answer you're looking for? Browse other questions tagged database-design ms-access relational-theory or ask your own question.