After reading a few of the similar problems to mine and none of them working, I thought I'd attempt to be more specific to see if my root problem needed to be fixed differently than the others.

I've been using MySQL for about a year now and it's always worked fine -- but I got a new Macbook Pro (10.9.3) yesterday, and everything migrated and runs great except for MySQL. It's running:

My root user is enabled and I checked to see that the password is the same as my user login (and the same as it's always been) -- but every time I try to run it, whether it be through Terminal or through Sequel Pro, I always get the same:

I also traditionally use Sequel Pro -- which migrated over from my old computer without any problems, and retained the connection details its always had: 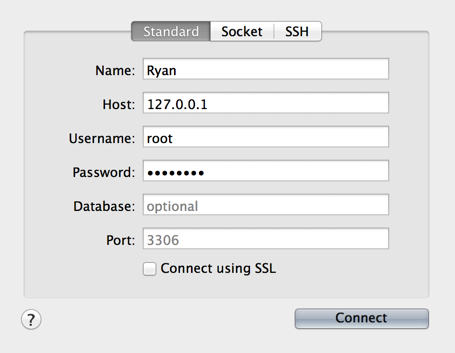 But I'm getting the same error message through Sequel Pro as I am through Terminal: 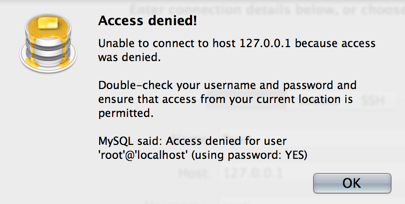 Does anybody have any ideas of things I can try? After attempting some of the other similar questions on here, I've unfortunately come up with nothing.

Not the answer you're looking for? Browse other questions tagged mysql mac-os-x or ask your own question.