In a SQL Server 2008 R2 instance two databases (the second one being a restore/copy of the first one) have been setup against the same .mdf and .ldf files.

Update: Indeed one of them is Standby/Read-Only. 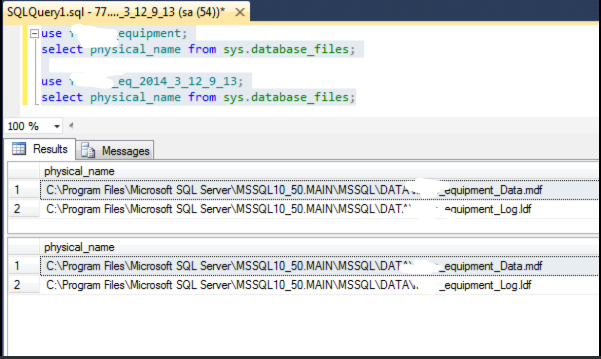 For a database in SQL Server, there's a setting called Auto-Close, which is meant to minimize the amount of resources used while SQL Server is running, but no users are actively doing things.

This setting is enabled by default in Express Edition instances, as those are usually running on developer workstations where performance isn't critical, and resources are needed for other applications.

When resources are released by this feature, the implementation includes closing the file handles associated with the database files (*.mdf, *.ldf, etc) on disk. This means that any other application can potentially open them, including the same or another instance of SQL Server.

In testing out this scenario, I found out there's no constraint inside SQL Server (at least in this particular version) that prevents attaching a database to the same set of files on disk, as long as they're readable. While this isn't a good/safe thing, of course, it's a relief to know that only one of the databases can be written to at a time, because the files will be exclusively locked by SQL Server when one of the databases is opened. The other database(s) will not be accessible.

To undo the situation:

Not the answer you're looking for? Browse other questions tagged sql-server sql-server-2008-r2 ssms files attach or ask your own question.

4
Relocate all files to folder checkbox unavailable sql server 2012
9
Optimal placement of tempdb, mdf and ldf files in SQL Server 2012 on SSD's?
5
What are the risks of copying MDF/LDF files without detaching the DB first?
3
What is the recommended method to move databases?
3
Is is possible to recover a database from the 'raw' files (.mdf and .ldf) of the old server to a new SQL Server instance on a new server?
2
Cannot re-attach SQL Server Express database to the same server after detaching?
3
How to check whether old MDF and LDF files are referenced
0
How to resolve MDF and LDF files remaining in use?