In all VS 2010/2013 and SSMS 2012/2014 the hotkey Ctrl+Tab (Global) is set to Window.NextDocumentWindowNav. Though I have tried modifying it then putting it back. 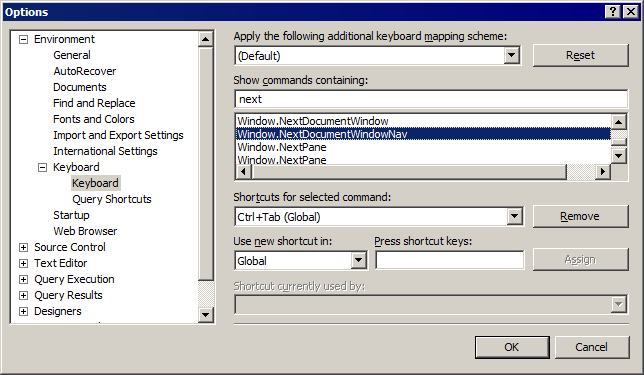 CTRL+F6 works the same as it always has.

Is there a way to get the CTRL+TAB behavior back?

To fix this issue: Tools \ Options \ Keyboard. Bring up the command in the "Show commands containing:" list. Then in the "Press shortcut keys:" text box press CTRL+Tab and click Assign. This will re-assign the command back to itself, but fixed the "sticky" window. Just had the same issue. Hope this helps. 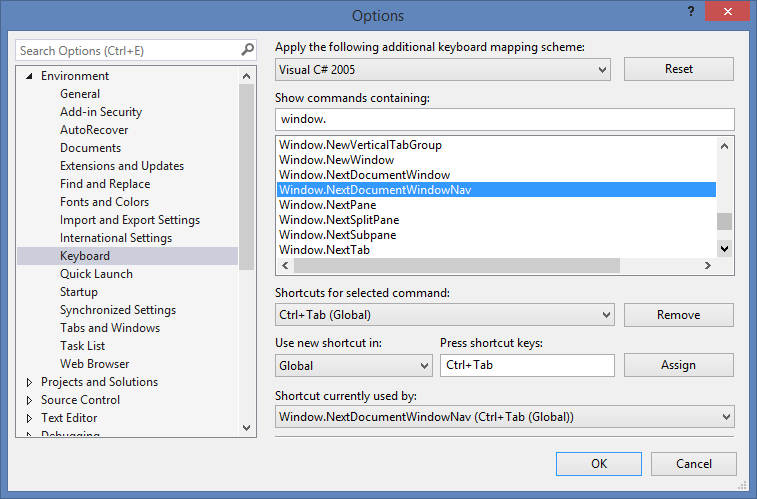 Not the answer you're looking for? Browse other questions tagged ssms or ask your own question.

5
How to assign CTRL+F1 to sp_whoisactive in ssms 2012?
0
SSMS 2014 installation - “Invalid license data” when opening ASP.NET files
3
Ctrl-F1 shortcut stopped working in SSMS 2014
0
SSMS 2012 CSV exports
6
In SSMS, is “Navigate to” (Ctrl+,) of any use?
0
Visual Studio 2010 Shell Error - is it Causing this SQL Server error?
1
Prevent SSMS changing tab to space when copying text from Result Tab
5
Where's my text highlighting in SSMS 2014?
0
Shortcuts for code snippets