How do I Continue After a Failure in SSIS 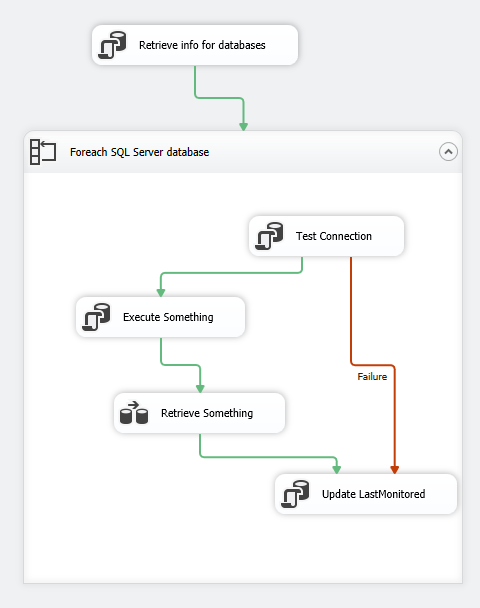 In this package, I want to loop through a list of database names, dynamically modifying connection manager settings.

However, the first failure on "Test Connection" will halt and fail the package execution.

But I'd like to continue my Foreach loop. I get the sense that this should be possible (otherwise what's the use case for these red failure arrows?)

To answer the question as I asked it, it is possible to continue after failures by making sure that MaximumErrorCount is zero for the task and its parent containers... In this case that means the "Test Connection" task, the "foreach" container and the package itself.

I ended up doing something different though. And Jamie Thomson's Verify A Connection Before Using It was helpful here. Here's what I did:

I replaced the Test Connection task with a script task. The script task was almost exactly like Jamie's script except that I

I also changed the arrows coming out of the test connection task to evaluate expressions, they evaluate:

I also had to remember to edit the multiple constraints going into the "Update LastMonitored" task. I changed them to use a logical "OR". 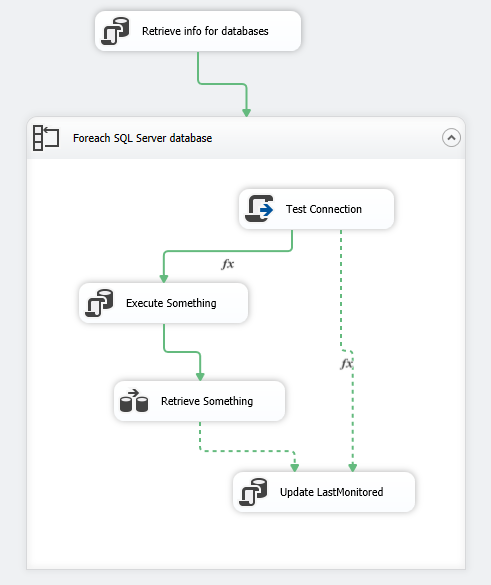 Double Click on the Precedence Constraint (The green line) after the "Test Connection" task. You should see "Constraint options", click on the drop down list "Value" and select "Completion". This tells your package to continue running after the task is completed regardless if it fails.

Note: Do not change the drop down list "Evaluation operation" from "Constraint" unless you want to add an Expression to be evaluated after the task has completed. Also keep the constraint at "Logical AND." 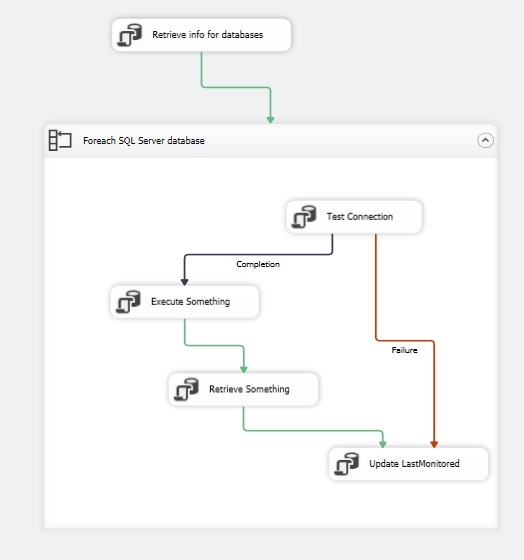 1
how to downgrade a statement for SSIS
4
SSIS Memory allocation
2
How to Implement a Retry Feature in SSIS 2012 When a Database Connection Fails?
2
SQL Server 2012 Agent Job not providing full failure message for SSIS Packages
1
How to unpack comp3 in SSIS
1
SSIS Package Deployment Failure using SSDT