In the following DELETE statement I try to delete all rows except the first one ordered by some criteria. (The actual query makes more sense, this is just a repro. All the sys.objects stuff is just for generating test data.) 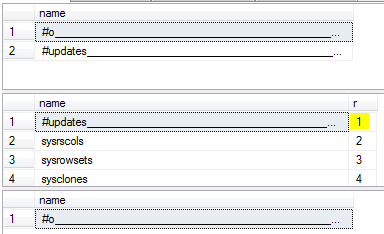 (The 3rd result set is complete - only one row.)

Note, that all rows except the first one were deleted. The numbering order of column r does not seem to match what was requested. And there is a row with r = 1.

This is expected behaviour at the moment

the function gets evaluated on the DELETE stream.

Long term, we need to actually fix the behavior of OUTPUT clause to match that of the ANSI SQL standard which will result in change of results. So we will look at the correct semantics for a future version of SQL Server since there might be apps that rely on the current behavior.

After the delete operator (to the left) the column values from the deleted rows are sorted back into object_id order and the row_number re-applied.

It looks like the same is happening in your case from the results. (temp tables have a negative id and are sorted first before sysrscols which has a low positive object_id of 3).

As well as the dubious semantics of the result the second sort by object_id doesn't seem strictly necessary in this plan as it looks likely that they will already be sorted in that order in any event.

Regarding workarounds for this specific case changing the output clause to OUTPUT Deleted.name, 1 + Deleted.r AS r would work.

For more complicated WHERE clauses I think you'd need a pass to calculate the row_number and then a join. e.g.

Do you really need ROW_NUMBER and OUTPUT? How about a nice set-based DELETE, eg something like this:

Not the answer you're looking for? Browse other questions tagged sql-server sql-server-2014 or ask your own question.