I've built a script/Agent job that goes and polls our linked servers every 10 minutes to make sure they are online. Now, when one goes offline, It generates an email and notifies me. See below: 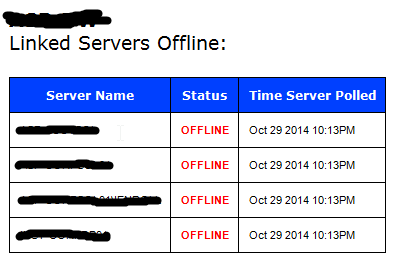 Now, right now it just uses a pass/fail. What I want to do is, when communication between servers goes offline, to generate not only that it's offline, but also the reason why. Similar to the read out you get from SSMS when you test a linked server and it's offline:

Is this possible? I've searched for any additional verbose parameters that may help me accomplish this but haven't been able to find any. The information gets generated in SSMS so that leads me to believe that there is some way to get it, I'm just not sure how.

Thanks as usual guys!

UPDATED Had to add some system specific functionality to this as well as my own SQL that I had already built but error reporting is online. Works with our SQL servers and our iSeries/400 environments. Here's what it spits out now:

Thanks again for all the help on this one. Might have to post this out to SSC so others can use it.

As with the linked answer, you should be able to do this by using TRY/CATCH; the catch (no pun intended) with the other answer is that, because the name of the linked server is validated at compile time, in the event the test fails, the batch doesn't execute. So instead, you can put the linked server test inside dynamic SQL:

This should allow you to capture a variety of errors, including:

You can also start the batch with EXECUTE AS if you are trying to test the linked server under specific credentials.

If the test of the linked server succeeds, you could continue inside the TRY block to do other things, like OPENQUERY, queries using 4-part names, etc., and there should be a whole slew of other errors you could capture and report on verbosely...

Aaron has answered your question perfectly. I am just adding the full script that I wrote to test in my environment.

Below is the script :

Below is the output:

Not the answer you're looking for? Browse other questions tagged sql-server linked-server or ask your own question.